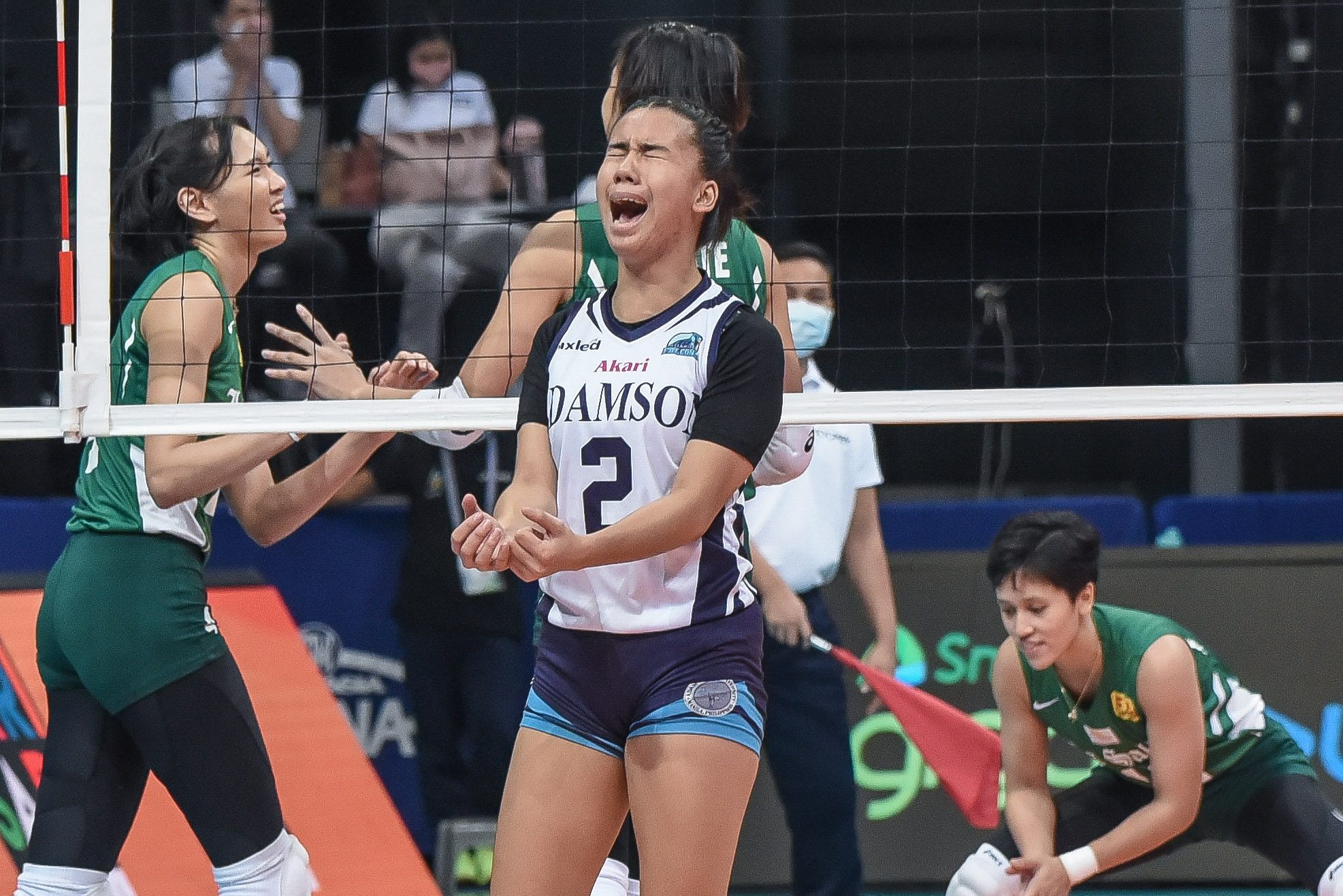 HOLDING ON. Trisha Genesis and the Adamson Lady Falcons rally past La Salle to force at least a fourth-seed playoff

Best Setter candidate Louie Romero again orchestrated a fine-tuned offense on her way to 24 excellent sets plus 11 excellent digs as Adamson wrapped up the elimination round with an 8-6 record.

Defending champion Ateneo (7-6) must now win its last assignment against ousted UP (5-8) to keep its title defense bid alive.

Meanwhile, UST (9-4) gains a golden opportunity to force a second-seed playoff for twice-to-beat advantage against La Salle (10-4) if it hands unbeaten NU (13-0) its first loss in their finals-worthy eliminations finale against each other.

La Salle looked headed for its second straight five-set game after super rookie Leiah Malaluan gave her team a 22-20 lead in the fourth off a kill.

However, the Lady Spikers gifted three consecutive error points for the 23-22 Adamson lead, before Almonte forced match point off a down-the-line hit following a Malaluan score.

Genesis then forced another match point following a Fifi Sharma block, 25-24, before Jolina dela Cruz ended the game with a long spike that caused raucous celebration among the Lady Falcons.

“We just worked hard. We told our players earlier to just work for every point,” said Adamson head coach Lerma Giron in Filipino. “Whatever the result may be, that’s up to God already.”

“I’m so proud of my ladies who didn’t just give up. Even though we were down big, they still fought for every point,” she continued, referencing Adamson’s first-set fightback from 7 points down, 10-17, which gave much-needed opening momentum for their side.

“We’re happy, if not a bit regretful. But at least we ended the season on a high note. It’s just a bit regretful because there are games that could have gone our way,” said UE head coach Jumbo Dimaculangan in Filipino.

Chen Tagaod went down swinging in the heartbreaking defeat – FEU’s first to UE in 11 years – with a career-high 23 points off 22 attacks, while Jovelyn Fernandez and Shiela Kiseo scored 13 and 10, respectively.