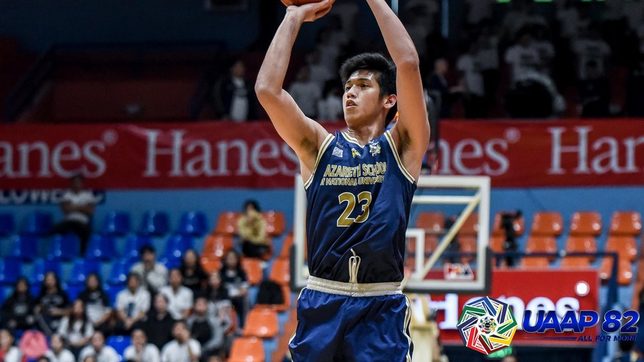 Standout high school ballers Carl Tamayo and Gerry Abadiano have committed to the UP Fighting Maroons, management confirmed to Rappler on Saturday, August 1.

In one of the bigger developments of college basketball recruitment this offseason, University of the Philippines continued to establish building blocks for its future by adding two standouts who were high-level players for Nazareth School of NU in the UAAP juniors level.

“We are very happy to have Carl and Gerry in our team. Coming straight out of high school, they have 5 full playing years with the team,” said UP head coach Bo Perasol in a statement.

“They will really be a big boost for our young team which is again in the process of rebuilding,” he added.

Tamayo and Abadiano ended their high school careers in style by leading NU to a season sweep and the UAAP Season 82 title.

Tamayo, who was ranked third in the NBTC UAAP high school rankings, was named Finals MVP after averaging 19 points and 18 rebounds a game in the series, highlighting himself as one of the country’s premier young big men.

Abadiano, a floor general, ranked No. 12, and scored 20 points in the Game 2 clincher.

“Carl [Tamayo] and Gerry [Abadiano] will be a big part of our rebuilding efforts,” said UP team manager Agaton Uvero.

“Six of our players graduated last season and we have 5 more players who have just one playing year left. These two talents will help us secure our basketball future. We hope they will be model student-athletes of UP.”

Both players will graduate high school in 2020, and will most likely be lined up for the Fighting Maroons when the UAAP looks to come back next year.

According to management’s statement, education played a big role in determining the decision of the two who played for Gilas in the 2019 FIBA U19 World Cup.

“We want to be both students and athletes. Basketball is not forever so quality education is very important for us,” Tamayo was quoted in the statement.

“If and when our basketball careers end, we want to have a back-up plan to fall back on. I learned this from my UP alum aunt, Mary Anne Tamayo, who raised me up,” Tamayo said.

Tamayo and Abadiano join a loaded Season 83 roster for UP that still includes Bright Akhuetie, Ricci Rivero, and Kobe Paras.