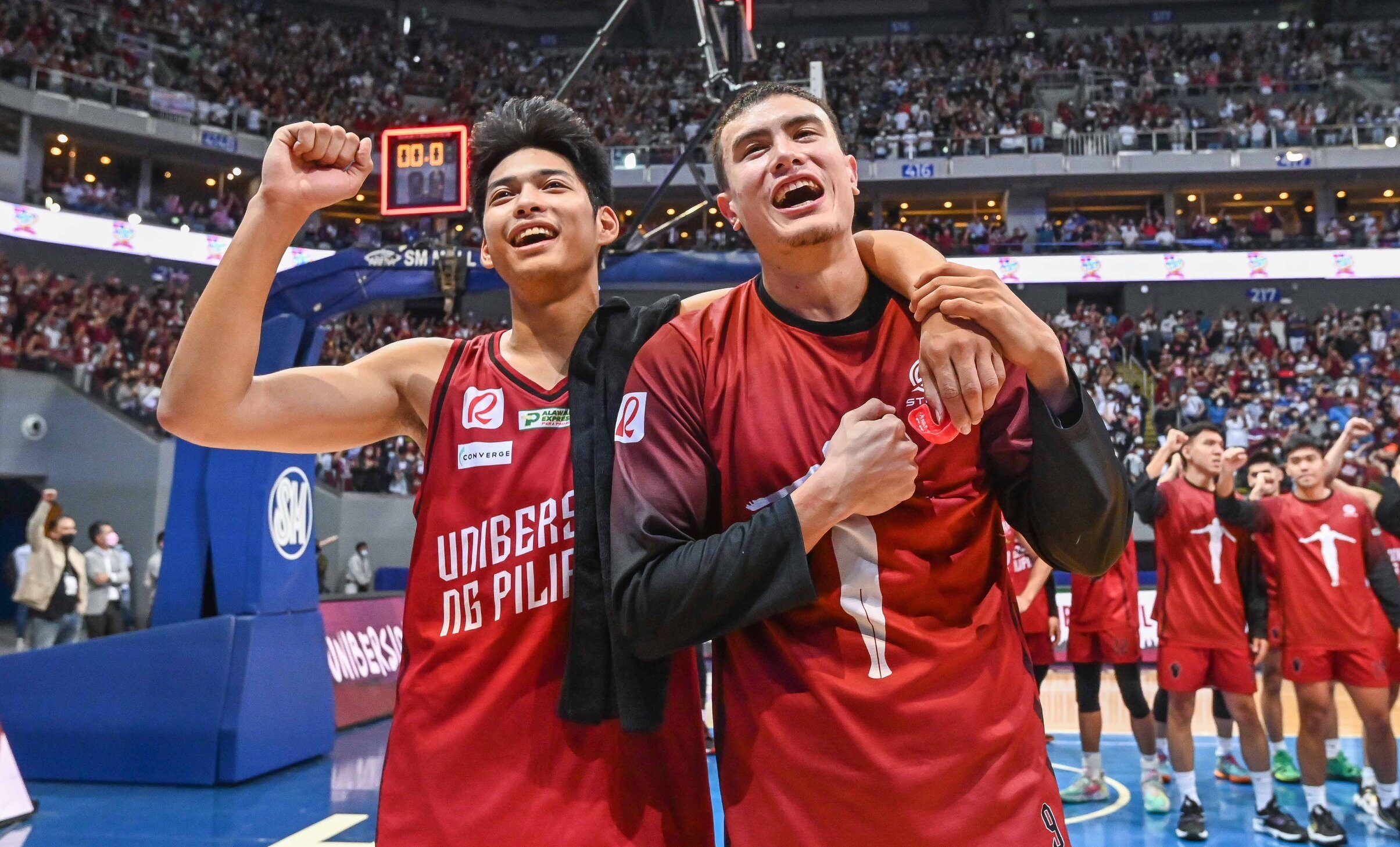 FAREWELL. Ricci Rivero and Noah Webb wrap up their UAAP stint with the UP Maroons as champions.

Facebook Twitter Copy URL
Copied
From tales of recruitment down to the miraculous shots, here are some inside stories on the UP Fighting Maroons’ championship journey

MANILA, Philippines – The journey leading to the University of the Philippines’ successful quest back atop UAAP basketball was filled with twists and turns.

From tales of recruitment down to the miraculous shots which ended mighty Ateneo’s reign, it’s as if the threads of fate were weaved their way. “Destiny” is what the UP faithful will always call their triumph.

Here are some inside stories on the new UAAP champions:

Cagulangan and the big move

UP’s management was adamant in their recruitment of JD Cagulangan after his stellar high school career by visiting him in his home province with the goal of convincing him to leave La Salle and join them.

The young JD politely declined then, insisting on his loyalty to the DLSU brothers and patrons who helped raise him.

But after barely playing as a rookie in 2019 and hearing that another point guard in Evan Nelle would transfer from San Beda to La Salle, his dad reached out to UP to gauge their interest – it was still high and the timing was good, because starter Jun Manzo just played his final season.

The former Green Archer also asked permission from his old institution to leave for a “clean break,” said UP backer Jonvic Remulla. In 2022, Cagulangan would be responsible for three big plays in overtime of Game 3 which helped UP stun the four-peat seeking Ateneo.

The final shot he made is tougher than it looks because of what it requires: maneuvering past a lengthy defender in Gian Mamuyac, feigning a pass to Malick Diouf, remaining balanced on the step-back, and shooting in rhythm.

That exact move was worked on tirelessly with skills coach Patrick Tancioco.

Every day before team practice, the duo perfect the movement and shot, ensuring UP’s point guard converts at least 10 times.

He was readied for that moment both physically and mentally. Now, he’ll be a hero the UP community forever remembers.

Cansino and the bubble

Management first got word of CJ Cansino’s unhappiness in UST’s “Sorsogon bubble” after he spoke up to his coaches and didn’t get support from his teammates.

On his way back to Manila, suitors began reaching out. When he eventually met with UP, he knew that’s where he wanted to land.

“At that time, he was looking for a refuge,” said UP backer Pato Gregorio.

“We didn’t talk about what happened in Sorsogon. I said, ‘Let’s not talk about that. It’s unfair to [UST]. What’s important is you, what are you looking forward to, what’s the future?’” Remulla recalled.

“Our approach to CJ was our approach to Ricci (Rivero). He had the same issue at La Salle. We never asked. We didn’t want to know,” said Gregorio. Fast forward to Game 3 of the finals against Ateneo, and Cansino was faced with another conundrum: risk further injury to his knee or miss out on what could be a once-in-a-lifetime opportunity?

“Everyone in management tried to dissuade him,” said Remulla.

Still, Cansino decided to suit up on game day, scoring 14 points and the game-tying triple to force overtime.

Zavier and the family sacrifice

UP was one of the three universities which coveted Zavier Lucero when word got out of his interest to play in the Philippines, beating Ateneo and La Salle.

“The first time I saw him, I was in LA and he was in San Francisco. He flew to LA using his own money – morning flight, meeting in the afternoon, and fly back after,” Gregorio shared, impressed by Lucero’s independence and commitment.

The next time Gregorio was in the United States in November, Remulla was with him.

“It concluded with us meeting the parents… His parents were very nice. They were explaining his personality, character, and they were very quiet.”

Lucero’s mother was emotional because it would be their first Christmas apart.

But Lucero still lacked documentation to play as a Fil-foreigner, a common concern in collegiate recruitment.

Management flew in Lucero’s mom because she had to become a Filipino citizen before her son could, finalized her documentation, and then flew her back to the United States right away.

Gregorio called it a “sacrifice” on her part, but one that allowed Zavier to wear a UP uniform.

UP has its superhero in Lucero “He was our savior in Game 1,” Gregorio said, citing how Lucero’s hustle plays also allowed UP to rally in the finals decider.

UP’s title romp was also a personal victory for Zav, who fought past mental hurdles.

“Everyone was so happy for him. He got his mojo back.”

Ricci and the Game 2 blunders

After UP’s Game 2 loss to Ateneo, the team chemistry was rocky.

The Maroons rallied to take the lead but faltered late, as the Blue Eagles forced key turnovers to tie the series. Ricci Rivero, a veteran, was responsible for critical blunders.

“Zav and Ricci had a clash about the miscues,” Remulla said.

“Zav was complaining about the small things – diving for the ball, boxing out, and rebounding. He said [they] needed to pick it up as a team. He didn’t single out Ricci.”

But it was Rivero who responded to Lucero and it wasn’t taken well. The two weren’t speaking until the following morning, so Ricci asked Remulla to mediate. 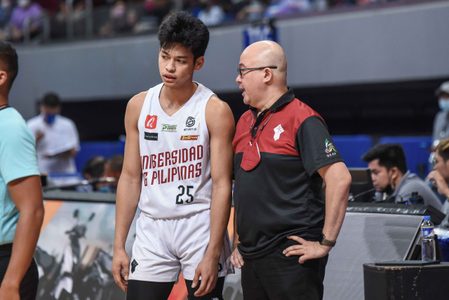 “I told Ricci, ‘Own up,’” Remulla said. “‘You cannot be clashing at this time and figure things out by raising your voices. If you want to be the leaders of this team, you have to take the temperament of coach Gold (Monteverde) – he doesn’t shout at players, he never needs to shout.’”

Ricci followed suit. By the time Remulla spoke with Lucero, all was good. The Maroons had a nearly five-hour practice session that evening including film viewing and a players’ meeting.

Tamayo and the Gold kids

After getting blown out in Game 1 of the Final Four against La Salle, the Maroons had to overcome food poisoning and diarrhea the day after, suspecting it was caused by the post-game dishes they had.

The players weren’t fully recovered for Game 2, but still advanced to the finals thanks to the heroics of Rookie of the Year Carl Tamayo.

Tamayo struggled in the series before propelling UP’s late-game fightback, which included the lead-grabbing drive. The poise he showed for a freshman playing in his first Final Four was veteran-like.

“For a person who grew up without a father, he’s very stable, because Gold became the father-figure,” said Remulla. “At 12 years old, he joined Gold already. He lived in Gold’s house.”

We, not me: Tamayo turns emotional for teammates’ drive in huge UP comeback win Tamayo, along with Gerry Abadiano and Terrence Fortea, were all mainstays for coach Goldwin Monteverde’s two-time champion NU Bullpups roster, and they were expected to move to the seniors squad. When that unraveled, UP pounced on the opportunity.

“These kids are happy for each other. There was never any jealousy of who was the star of the game,” said Remulla.

Diouf and the Ramadan

When the Maroons started trusting Malick Diouf with the ball, that’s when UP started utilizing their foreign recruit not just as a scorer but also as a playmaker.

Diouf, though, would struggle again in the second round, but for a different reason.

“Malik is a devout Muslim,” Remulla said of Diouf, who observed Ramadan mid-season. “Imagine playing at 2:30 without food and water since 5 am. No water during the game and none until sundown.”

Diouf, who also rejected dextrose as an alternative, struggled at the tail end of the elimination round and played less minutes than Lucero and Tamayo, but picked up his performance by early May on Eid al-Fitr, which marks the end of Ramadan.

Unsurprisingly, that’s when UP halted Ateneo’s record 39-game winning streak and rode that momentum to the championship.

Diouf was the key reason UP pulled off the elimination-round upset, as his defense combated Ateneo and UAAP MVP Ang Kouame.

Spencer and the missed three

James Spencer carved an essential role for UP, playing as its defensive stopper and go-to clutch shooter.

It’s easy to forget now because of the two timely triples he hit to propel UP past Ateneo in the finals, but in 2019, Spencer was the one who missed the game-tying triple in the Fighting Maroons’ disappointing Final Four elimination against UST.

That moment stayed in his heart and mind.

“I used it as a source of motivation,” Spencer told Rappler after Game 1.

“I had the clip of me missing the three saved on my phone and I remember looking at it multiple times over the last couple years. I just naturally started expanding my range when I was working out back home (in Australia).

“I had that shot in the back of my mind when coach Gold was drawing up the play and I swore to myself if I ever got the chance to hit a shot like that again, then I would take it with no hesitation.”

“He spent three years shooting nothing but three-pointers,” Remulla shared. “He shed 10 pounds of weight and gained 5 pounds of muscle. He came back ripped.”

And sometimes, too, it’s the painful moments that lead to better outcomes. – Rappler.com