MANILA, Philippines – In 2005, the film ‘Coach Carter’ first hit movie theaters worldwide. With Samuel Jackson casted as the story’s main protagonist, the film centered on a basketball head coach and his high school team composed of individuals with different personalities, though with one common aspect.

Each one of them was a student-athlete, though not everyone acted like it. Some of the characters opted not to go to class, showed no interest in their studies, and thought the pros of a basketball career outweighed those of graduating with a high school diploma.

Coach Carter (Jackson) changed their mindset, putting the importance of studies above athletics and further capitalizing how “student” comes before “athlete.” Needless to say, his boys got the message. It was just a movie, but the underlying message for athletes all over the world was clear.

“Being an athlete does not mean you have a free pass to not do well or try to make an effort in class,” according to Aguilar, who majored in two courses.

He also went on to win numerous swimming titles for La Salle (seven gold medals in total), broke Enchong Dee’s (a former DLSU swimming star) record with an individual medley time of 4:43:01, broke the Philippine record in the men’s 50 meters backstroke with a time of 27.52 seconds, then broke it again in the 26th Southeast Asian Games with a time of 27.29 seconds, and broke the UAAP’s 100-meter and 200-meter time for backstroke.

He did all of these while receiving 4.0s and 3.5s in class, which, in La Salle’s grading system, is really, really good.

When Aguilar graduated, he had countless swimming titles on his mantle of accomplishments and had a huge medal around his neck for academic performance.

Clearly, Aguilar personified what it means to be a student-athlete.

Aguilar took his first dip in the pool as a seven-year-old, not knowing it would play a major theme in his life moving forward.

“It started out as a simple summer hobby when I was seven when my mom enrolled me in a summer swimming clinic. From there, the coaches I swam with encouraged me to go competitive and the rest is history,” he shared in an exclusive conversation with Rappler.

After hours of non-stop training and numerous victories in amateur competitions the following years, Aguilar enrolled in De La Salle University in 2009 and chose a path not many athletes likewise do.

“There are a combination of factors that made me choose DLSU,” he explained. “First would be my course or degree. Taking up Applied Economics and Applied Corporate Management, I thought DLSU had one of the best programs especially in economics through its experienced professors and excellent feedback from my friends.”

By doing so, Aguilar was agreeing to spend early mornings in the unkind cold of DLSU’s Enrique Razon Sports Complex pool, go to classes before lunch, take more classes after lunch – if lunch wasn’t spent cramming for exams – training again for hours beginning late afternoon, and then using his nights to do more school-related work.

And that’s not yet including the days, sometimes weeks, he had to spend out of town for different competitions, in which freedom to accomplish his class-related objectives was not always available.

Time was limited. An 8-hour sleep was celebrated.

But despite the challenges, Aguilar felt he had the perfect venue in DLSU to accomplish his tasks.

“I had this impression that DLSU had the most similar culture to Chinese Christian schools where I came from, given that there are a lot of Filipino Chinese students as well, which meant an easier time to adjust in terms of culture,” he said.

He also added that: “I live close to the university. It was very accessible and convenient for me. This, combined with excellent sports facilities and state of the art buildings, convinced me DLSU was the school for me.”

The next years would be great for Aguilar, as he rose to be DLSU’s greatest swimming one victory after another while remaining of the top students in his batch. However, he also faced numerous challenges that threatened to derail his goals, and he had to miss out on the little things that college students should experience.

“I would not call it a struggle, but it was a challenge everyday,” Aguilar said about his time in college. “As a swimmer, it is better if I am able to train everyday, so the challenge really is to find a way to still train everyday and remain productive in class and have time to study for exams.”

He did just that, but with responsibilities as a student and an athlete, sacrifices were essential for him to succeed.

“[It] meant sacrificing other things in life such as parties, social gatherings, and simply having fun at times,” Aguilar confessed. “As my classmates hanged out after class, I would go straight to training and even go to the gym after.” 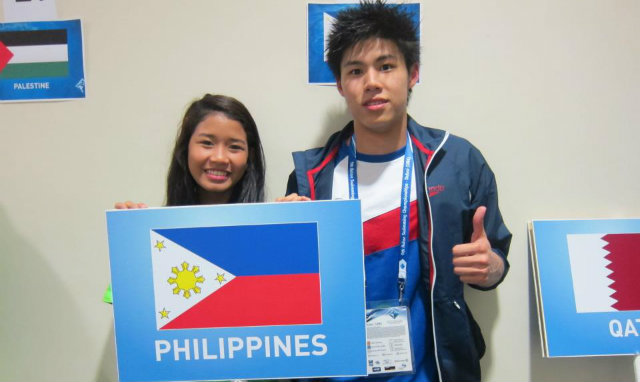 Johan Aguilar (R) poses at the 9th Asian Swimming Championships in Dubai, where he finished 7th.

Was it a huge obstacle? Yes. Could sacrificing social life be demoralizing for a student-athlete such as he was? Absolutely.

Though his collection of gold medals and high marks prove otherwise, Aguilar, too, is human. He has his limits. There are moments when he is tested. He has his breaking point where he questions his capabilities like most of us.

And for him, all the aforementioned issues heightened in the most hectic stretch of his collegiate swimming career three years ago.

“It was 2011 during my second term of my third year wherein I was taking up my majors and finishing my thesis for economics,” he said.

“I had to join the UAAP in September, the Asian Championships in October, the SEA Games in November, and ASEAN University Games in December.”

Four major swimming contests in as many consecutive months. That’s not yet counting the limitless hours of training and preparation, not to mention the mental toll such a process takes on a competitor.

And that was only half the battle.

“I was out for a total of around a third of the term and this was where I really thought I would not make it. I was taking advanced and make-up exams left and right and writing reports abroad. At the end of it, I was really drained and thought that it was impossible for me to maintain my First Honor Dean's List status.”

But not everything was as bleak as it seemed.

Pleasantly surprised, Aguilar was shocked when he checked his grades for the trimester in which he was absent for about a month, saying, “My GPA for that term was 3.4, which is just the GPA for a First Honor's Dean's Lister.” Moreover, his accomplishments as an athlete ballooned as well.

“That was also the year I was awarded UAAP Athlete of the Year for being the UAAP MVP and breaking the Philippine record in the SEA Games.” 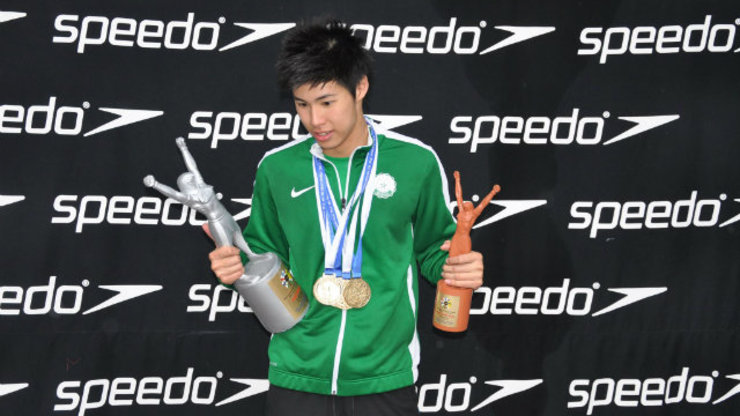 Johan Aguilar shows off two of his trophies from the UAAP Awards ceremony.

Facing the toughest challenge of his life, the three-time UAAP MVP made it out of the debris better than he expected while keeping his achievements both in the pool and in the classroom at parity.

He didn’t do it all by himself, though.

“It was really a team effort and I would really thank all those who supported and helped me get through that stressful point in my life,” Aguilar reflected.”At the end of it all, I really thank everyone: classmates, friends, my parents, and even the Lord, for helping me through those challenges because I know it was really impossible for me to do everything alone.”

What it means to be a student-athlete

Coach Carter believed academics were more important than statistics on the basketball court. Recently, even the NCAA has put significance when it comes to its athletes’ grades, and they proved how serious they were by making a number of underperforming students ineligible for this season.

When Aguilar was asked to make a choice between what was more important, athletics or studies, he didn’t shy away or give a politically correct response. For him it was clear, but he doesn’t encourage others to make the same choice.

“In my opinion, although studies should be prioritized than athletics, this doesn’t mean one has to give up being an athlete. In fact, being an athlete presents a lot of benefits as well in building you as a person and developing your character and experience as well.”

But he also wishes some athletes would put more importance in their schooling. Aguilar is street smart as much as he is book smart, and he isn’t oblivious to the limitations of relying only on your athletic prowess.

“I think the key here is the mindset. The mindset of student-athletes should be for the long run. We should accept that not all athletes will excel in their sport or even so make it a long term career after they graduate,” he explained.

“That is why as a student-athlete, it is still important to do well in class so that you become flexible when you graduate, you have career options to choose from, and you're not trapped in just being an athlete,” he added, before mentioning that being “businessmen” or excellent corporate employees” are careers some could be establish if they take their studies seriously.

UAAP swimming doesn’t make news waves like basketball – or, nowadays, volleyball as well. Who knows if Aguilar will have a jersey retired like some of La Salle’s greats in the two aforementioned sports. Though if there’s a line for DLSU athletes who deserve such distinction, he should be at the front.

But he will be remembered, nonetheless. Not only for his contributions to the school’s swimming team, but also for his dedication in the classroom. Adding to that, Aguilar will serve as an inspiration to Philippine athletes in the future as proof that balancing both fields is possible and can yield great results.

“Even if you are exceptionally good in your sport, in my opinion, you should also make a conscious effort to do well or at least never leave behind studies,” he added, promoting commitment.

“There are times where you really need to sacrifice one for the other,” he later warned.

But: “I think the more important part of valuing education is that you immerse yourself in the right mindset, work ethic, and it challenges the way you think. In the long run, this will play a big role in determining the person you become as well.”

And last but certainly not the least:

“It's not right to just simply go with the stereotype and just accept what society thinks. It's really about commitment, committing to be more than what society expects you to be.”

Without a doubt, Johansen Aguilar, like Coach Carter, is a model of merit to all. - Rappler.com