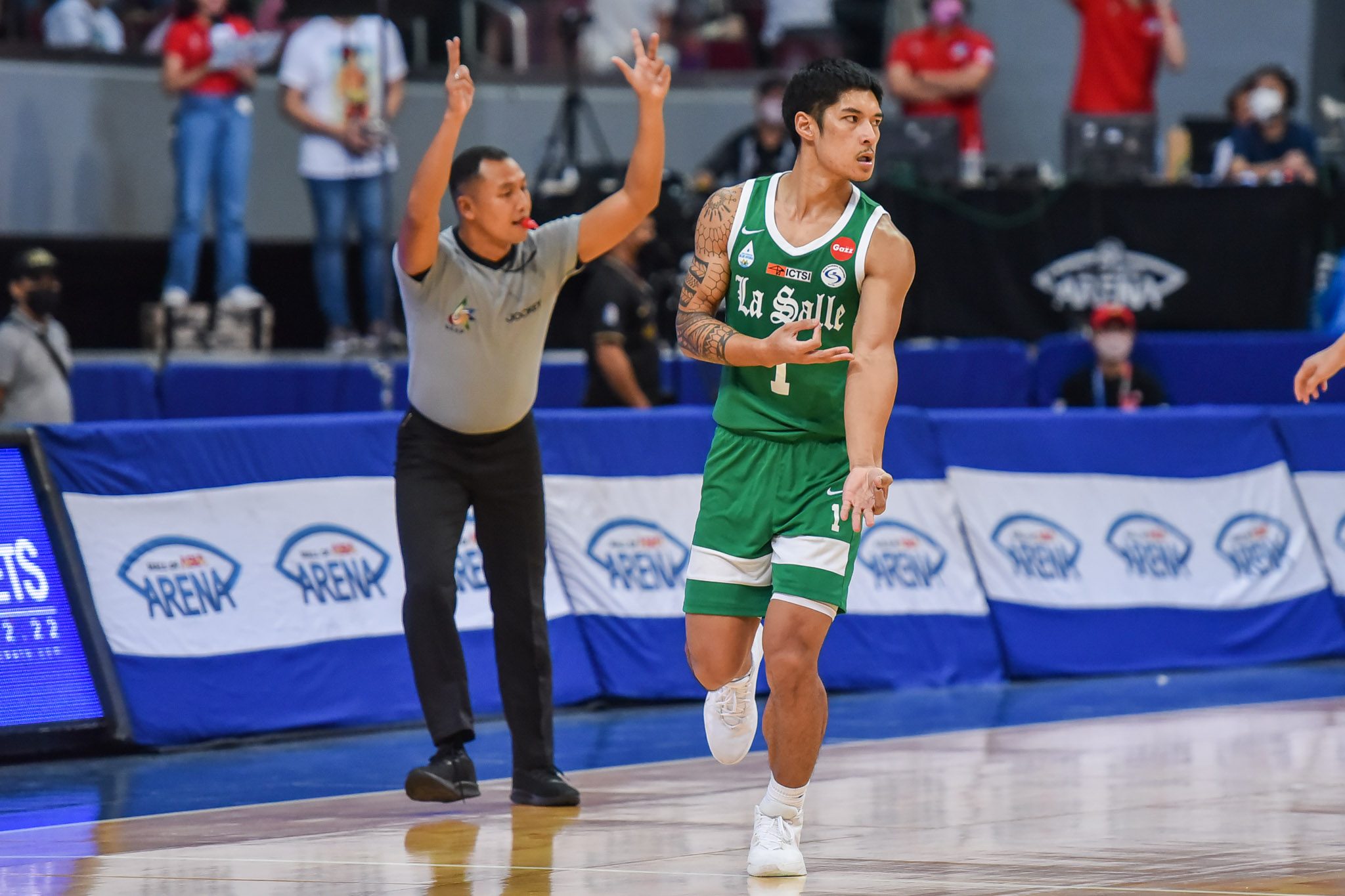 UNDERDOGS. Kurt Lojera and the Green Archers hope to complete an upset of the Maroons.

Facebook Twitter Copy URL
Copied
After two heartbreakers against UP in the elimination round, La Salle hopes to march to the finals with a semis sweep of the No. 2 Maroons

MANILA, Philippines – Discipline is arguably the most important trait required when completing a task.

It involves this question: can one hold firm in his or her beliefs when the going gets tough, or falter in the face of momentary setbacks?

Save for the final minutes of a performance which kept their season alive, De La Salle Green Archers displayed tons of discipline to extend their Final Four series against the UP Fighting Maroons on Wednesday, May 4.

“We played 40 minutes of solid, disciplined basketball [against UP]. That’s what I’ve been asking them to do, and we’re proud of the way [our] guys played,” winning head coach Derrick Pumaren said following their 83-80 triumph in front of an energetic crowd at Mall of Asia Arena.

Although the final score makes it seem like a close battle took place between second-seeded UP and third-ranked DLSU, the Green Archers were the ones who were in command for most of the contest, looking like the favorites rather than the underdogs.

The first time both teams faced off in Season 84, La Salle surrendered a lead in the fourth period to the comeback-minded Fighting Maroons.

For their second duel, UP looked and played like the better team and stayed in control until the Archers’ late-game fightback with under two minutes left faltered.

It seems like the third time is indeed a charm, because DLSU reversed the script to open this Final Four series that will now go the distance.

They established a lead that extended to as high as 22, had an answer every time the Maroons threatened to make a game-changing run, and got enough stops down the stretch to prevent a pressure-packed overtime.

“It was all really a team effort, everybody was on the same page in [the game],” Pumaren said.

Sometimes, there’s comfort to having your back against the wall. At that point, there’s nothing left to lose, so might as well go down swinging.

In what could have been his final UAAP game, Justine Baltazar set the tone for his team.

He started his La Salle tenure learning and winning under Ben Mbala, suffered through the non-Final Four seasons with batchmates, and is closing the delayed final chapter of his collegiate career as this squad’s leader.

Baltazar hit a few midrange jumpers early, scored in the paint, and protected the rim on defense. He finished with 15 points, 18 rebounds, and 2 blocks, but arguably the most impressive contribution he had was limiting UP to only one shot per possession during the stretch in the second quarter where La Salle started pulling away from their challengers.

His 7-of-20 shooting afternoon isn’t surprising given his season average, but Baltazar impacts the game in more ways than just scoring. He challenges every shot he can, disrupts passing lanes, and can even bring the ball down the floor when the guards are defended tightly. These are important traits one doesn’t always see in the stat sheet.

There’s also an old-school confidence to him that endears to the DLSU faithful in attendance.

(Coach said there’s no tomorrow, so we really gave our best.)

At halftime, former Green Archer Aljun Melecio shared a key observation: that every dead-ball (aka, the 50-50 balls) were going La Salle’s way. The squad that plays with more hustle and grit typically wins that battle.

DLSU has had a habit this season of beating itself with ill-timed turnovers, unimaginative offensive execution, and inconsistency. That could be why Pumaren keyed in on the word “discipline” first when asked to comment on their performance, because it was their best since the UAAP returned in March.

The Archers’ recent improvement started with their tightly-fought win against Adamson to secure a Final Four ticket, followed it up with a triumph over the NU Bulldogs despite missing two important players, and carried it over against a UP team that look scattered just days after completing a historic upset.

It’s no coincidence that the recent stellar play of Evan Nelle has coincided with La Salle’s winning streak.

Struggling with his jump shot to start this season, Nelle began knocking in his mid-range and three-point jumpers in the second round and also excelled in his floor general role. His presence organizes a sometimes disjointed DLSU offense and his improved shot-making has opened up opportunities for teammates to attack.

Nelle finished with an impressive 26 points on 8-of-13 shooting to go with 7 assists, 6 rebounds, and 3 steals on Wednesday. Those are professional-level statistics in a 40-minute, college elimination game.

Whenever DLSU needed him to make a shot to halt UP’s momentum, he was ready to uncork a J. He knew when to push the pace in transition, noticing when his team had numbers, and pulling back when they didn’t. He made sure La Salle didn’t rush its half-court offense, especially once they took the lead. He knew how to get the ball to the player who was momentarily on a roll.

It’s the little things and simple decisions that are signs of playing with a disciplined mindset.

“Control the game talaga yung nasa isip ko eh (that’s what I have in mind), and fortunately my shots were going in,” Nelle said, before stating he wants to play even better.

Kurt Lojera also deserves praise for the steadying factor he was, including the shots he hit to keep DLSU’s lead from sinking to below double digits in the third and early fourth quarters. Michael Phillips didn’t stuff the scoreboard, but hauled down 15 rebounds and used his gigantic wingspan to deter UP’s attempts at the rim.

But their aspirations aren’t finished. Both times UP lost this season, they responded well: first, with an eight-game winning streak after dropping their opener against Ateneo; and second, when they won four straight games after losing to Adamson, which included wins against the Green Archers and Blue Eagles. Head coach Goldwin Monteverde knows how to get his boys to bounce back and quick.

There are also interesting questions to consider:

La Salle made nine 3-balls on Wednesday. Can they repeat that performance, given their up-and-down shooting splits from this season?

Was UP’s late fightback random, or a sign that La Salle has difficulty in closing out games?

“It was a lesson for us, that the game is not over till it’s over, so we just have to be ready for that,” Pumaren said.

The veteran head coach who’s been through his share of collegiate battles believes momentum is on DLSU’s side after winning Game 1, but isn’t oblivious to the fact that UP will match his team’s desire to stay alive in a win-or-go-home setup.