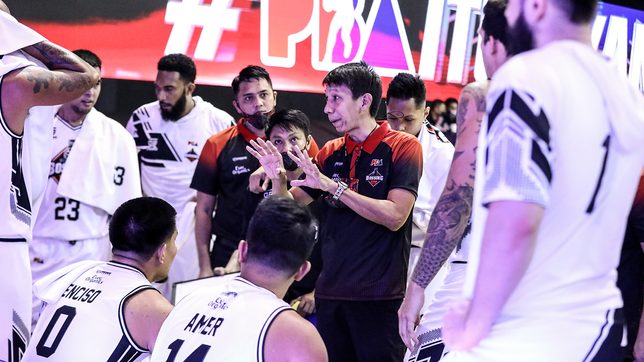 College basketball champion mentor Nash Racela is the favorite to be named the new head coach of the Adamson Soaring Falcons, Rappler learned from trusted sources monitoring the situation on Thursday, September 23.

Racela, whose unceremonious tenure with the Blackwater Elite in the PBA came to an end this week, will call the shots of a UAAP team for the second time in his coaching career.

According to sources, Adamson will present the 49-year-old Racela with a five-year contract to rebuild the Soaring Falcons program following the departure of former head coach Franz Pumaren, who is venturing into politics once again.

Racela beat out other candidates such as Eric Altamirano, who is another former UAAP champion, PBA legend Sean Chambers, and Dutch-Serbian mentor Toni Vujanic.

According to a well-placed source, Adamson has been keen on Racela since the start of their search because of “his capability and amiable way of coaching style.”

Racela, who called the shots for Far Eastern University before heading to the pros, steered the Tamaraws to the UAAP men’s basketball crown in 2015.

With regards to the length of the contract, the source mentioned that Adamson will give Racela adequate time to bring the Soaring Falcons back to UAAP contention.

“With the current lineup of Ateneo, UP, and La Salle, it will be an uphill battle,” the source said. “Have to think beyond two years of competitive capacity.”

Racela has yet to submit a preferred list of assistant coaches to join his staff, although the expectation is that current interim Adamson head coach Mike Fermin will be part of it.

Once formalized, Racela will likely begin online workouts with the Soaring Falcons’ players in October.

Racela’s most successful coaching tenure was with the FEU Tamaraws from 2013 to 2016, a four-year stretch where he led the team to the UAAP Final Four each season, including two finals appearances in between.

The Tams made the finals in 2014 but fell to the NU Bulldogs, who were coached by Altamirano.

Racela left the college ranks to coach TNT and subsequently Blackwater in the PBA, but remained as a consultant for the Tamaraws, who are now coached by his brother and former PBA star Olsen Racela.

With Adamson, Racela has the chance to develop young blue-chippers such as AP Manlapaz, Jerom Lastimosa, and Aaron Fermin.

After making the Final Four as a No. 2 seed in 2018, the Soaring Falcons missed the UAAP semis the year after.

There is still no official announcement from the UAAP on when the collegiate tournaments will return. – Rappler.com