MANILA, Philippines – Another Phillips brother is headed to De La Salle University as Isaiah Phillips, the younger brother of Benjamin and older brother of Michael, joins the Green Archers for UAAP Season 86.

The 22-year-old middle child of the trio is currently finishing his undergraduate degree at Miami University, where he is majoring in East Asian Studies with a minor in Japanese.

Isaiah, who will have three years of UAAP eligibility, will then enroll for his master’s degree at La Salle, where he will be part of the Green Archers’ pool of talent to compete for Season 86 roster spots.

“I graduate here from Miami University [in Ohio] in May. After [that], I’ll be flying over to the Philippines,” he told Rappler.

Once he gets to Taft, he believes his first order of business is to “try out” for the Green Archers and prove to his coaches that he deserves a roster spot.

“Alam ko na maraming magaling na players sa La Salle (I know there are a lot of good players at La Salle), so it won’t be easy, but I want to do my best to try and help La Salle win more games and to represent the La Salle community.”

The 6-foot-8 Isaiah is a multi-sport athlete, having played varsity basketball and volleyball in high school while also participating in competitive boxing. He considers himself a “defense-first type of player.”

“I feel like I can bring a lot of energy on the defensive end, and in the offensive end in the post, short mid-range jumpers are something I work a lot on and something I hope to improve for the tryout and hopefully I can showcase that.”

The apparent “peacemaker” when Benjamin and Michael would butt heads as kids, Isaiah said that he can “run the floor, do the dirty work, dive for the loose balls, support the players, and just do what coaches ask me to do.”

Isaiah is currently on an academic scholarship at Miami University, but has been playing 5-on-5 games and going to the boxing gym to condition himself for the UAAP.

The absence of Michael Phillips due to a concussion proved to be a big blow as La Salle missed the Final Four bus in Season 85.

Michael, though, is now “out of the woods,” according to his father Benjamin Sr.

“It helped me realize my health was really important,” Michael said. “Everything is planned for God. Right now, I’m blessed, my headaches are a lot better. I’m having concussion therapy here in the States. I think the thing that’s been helping me is being with my family.”

Michael, who after trimming weight in 2022 is now back to his natural body weight of 230 pounds, is already participating in 5-on-5 scrimmages and conditioning drills while he stays in Florida. He will fly back to Manila in February.

“It’s really tricky,” he said of the rehab. “It’s based around rest, rest, and rest. That’s what my doctors here and in the Philippines have said.”

“Luckily, I’m past that full-rest part. I’m doing some exercises, some hand-eye coordination things. Just taking it step by step.”

While Michael eases back into action, Benjamin has dived head-first into a taxing schedule.

The oldest of the siblings shared that he starts his days early in the morning to focus on work emails for the businesses he owns back home in the United States. That includes a workout-themed phone application and a men’s facial grooming enterprise.

He then works on his thesis so that he can finish the final semester of his masteral studies before following his mother’s footsteps and attaining a doctorate in the years to come.

After lunch, he joins the La Salle men’s volleyball team’s practices in preparation for their upcoming UAAP Season 85 campaign.

In the afternoon, he joins the Green Archers’ training sessions, now under the direction of new head coach Topex Robinson.

He is also in the process of writing his second book. His first novel – Lone Wolf Mentality: A Millennial Mindset – was published in 2019.

“It’s pretty demanding,” he admitted, “but when you’re given so much opportunity here at La Salle, you want to maximize and give as much as you can to the school.”

Ben, who earned more playing time and performed better on the court in his second season with La Salle compared to his first, believes cross-training between volleyball and basketball allows him to improve in each field. 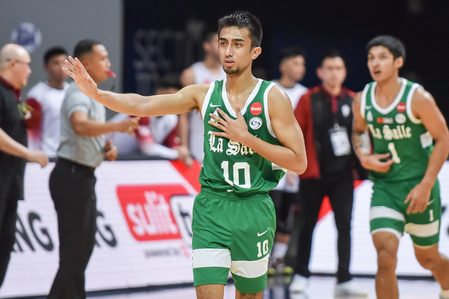