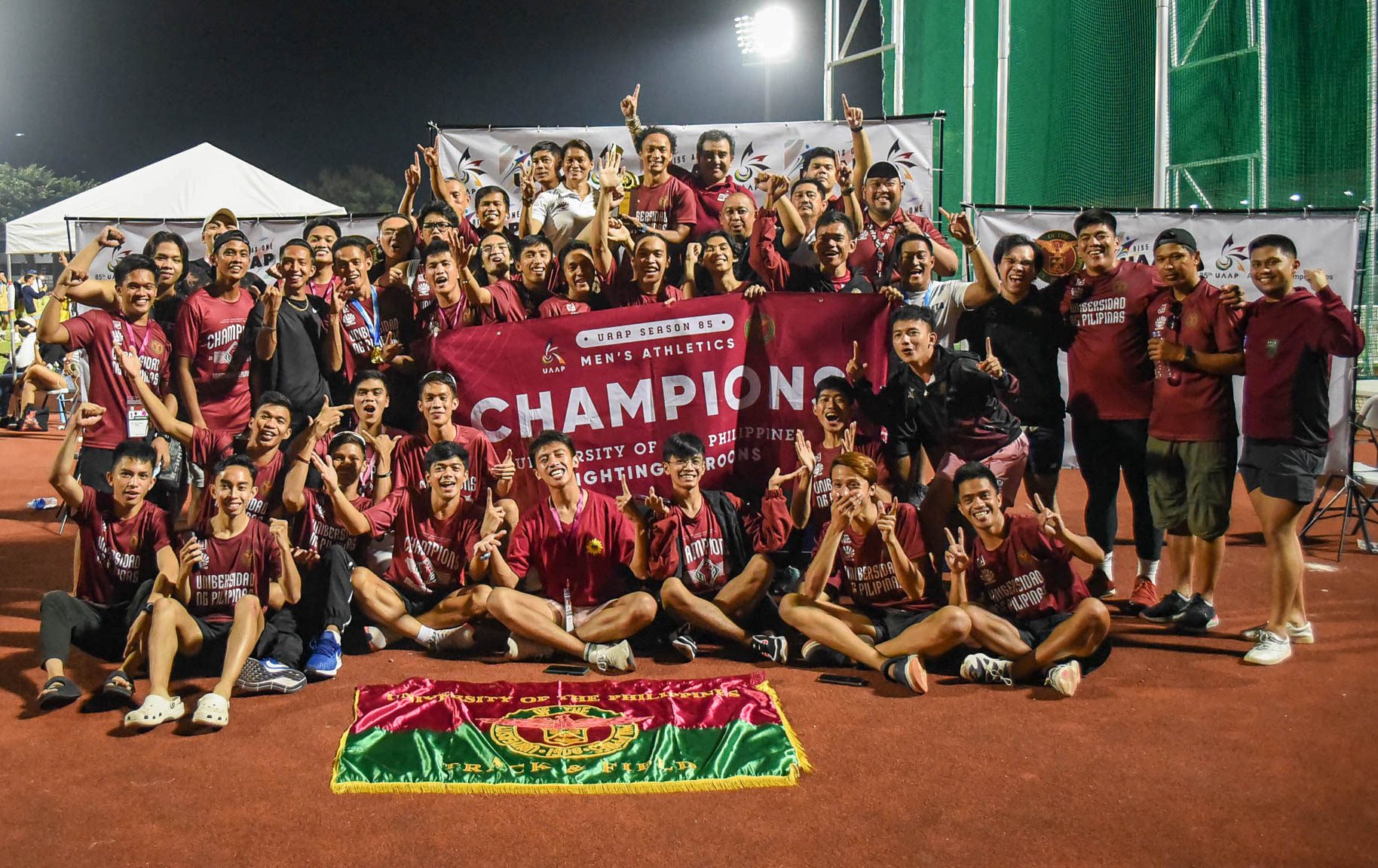 Facebook Twitter Copy URL
Copied
UP goes back-to-back for its 20th men's crown, while UST recaptures the women's tiara it lost after four straight titles in the UAAP athletics championships

MANILA, Philippines – UP captured back-to-back men’s titles, while UST reclaimed the women’s tiara as they ruled the UAAP Season 85 athletics championships at the PhilSports Track and Field Oval on Sunday, December 4.

The Fighting Maroons copped their 20th men’s crown behind 11 golds, 7 silvers, and 5 bronzes to finish with 358 points, besting NU (280) and seven-time champion FEU (224) for the top podium spot.

“We’re extremely happy because this is for the athletes who sacrificed during the pandemic. They did not know whether they were still going to compete or not,” said UP head coach Rio dela Cruz in a mix of Filipino and English.

“So this competition is a big thing for them.”

Meanwhile, Labita led the way in the 4x400m relay as he and teammates Edwin Giron, JC Yuzon, and Ferdinand Tridanio bagged the gold after clocking 3:18.18.

Labita earlier completed the sprint treble of the 100-200-400m and the 400m hurdles, before taking the first-runner cudgels in the 4x100m relay.

UST’s Jhon Ballelos ruled the hammer throw with a heave of 43.09 meters, while NU’s John Nicholan Pangan and UP’s Ed Delina rounded the podium with 41.76m and 40.97m, respectively.

Decathlon champion Allen Mationg of FEU won the top rookie plum in the men’s side.

In women’s action, the Female Tiger Tracksters garnered 307 points behind 7 golds, 2 silvers, and 8 bronzes to edge La Salle (288) and recapture the championship it lost in Season 81 after four consecutive titles.

“We had to work,” said UST head coach Manny Calipes. “If you want something to happen, it is up to you. Our role as coaches is to guide them. Fortunately, they showed up in Day 4 and Day 5.”

The Lady Green Tracksters opened the last push for a comeback with a gold in the long jump courtesy of Trexie de la Torre, who recorded 5.78m. Adamson’s Diana Hurano and NU’s Alexie Caimoso wound up at second and third with 5.60m and 5.54m, respectively.

Caimoso then ruled the 100m hurdles with 15.43s, just two one-hundredths of a second ahead of FEU’s Sunshine Silvestre (15.45). UST’s Justine Mae Catindoy then provided the boost to their title closeout with a time of 15.58 for the bronze.

The Lady Bulldog standout finished as this year’s top athlete with two more golds in the heptathlon and high jump to go with her gold in the hurdles and bronze in the long jump.

UP’s Abegail Manzano took the 3000m steeplechase gold with a time of 11:50.58 seconds. The 2-3 finish of Thomasians Camila Tubiano and Edralene Celestial with 11:57.02 and 12:04.00, respectively, virtually sealed the title for their school.

Manzano earlier won the 5000m gold and the 1500m bronze to clinch the Rookie of the Year honors.