“There’s so many people in our ear, even in the UP community itself, they just say ‘kahit one win lang (just one win please).’ Why would you aim for mediocrity? Why would you settle for such a low standard?” – JR Gallarza

MANILA, Philippines – A piece of paper taped to the wall of the oven-like gym read the number 19. Later on it became 10. Players ran drills, or simply ran, past it. Coaches encouraged and criticized in front of it.

Barely anyone gave it a second glance, but it was there. The University of the Philippines Fighting Maroons are counting down the days to the start of what they hope will be major shift.

“For me, ever since I was rookie, my goal has never been one, two, 3, or 4 wins. Before it was just a 5-win minimum,” this year’s team captain JR Gallarza said frustratingly.

“There’s so many people in our ear, even in the UP community itself, they just say 'kahit one win lang (just one win please).' And why would you aim for mediocrity? Like why would you settle for such a low standard?”

“It’s not right. The school deserves much better than that. UP as a community, they deserve so much more than just one, two, 3 wins. They deserve numbers,” he added.

The Maroons are gasping for wins, and more importantly, starving for change come UAAP Season 78.

UP began its revamp by hiring a new coach in Rensy Bajar. He is flanked by Joe Ward, Allan Gregorio, former player Mo Gingerich and Poch Juinio. After that, it’s been a matter of developing a good basketball team and reshaping a mind long trained to accept defeat.

“Bago ako pumunta rito binanggit ko sa kanila na kung ano man yung nangyari sa nakaraan is tapos na yun (Before I started I already told them that whatever happened in the past is done),” explained Bajar, who refuses to aim for moon when he can aim for the stars and a Final Four trip. (READ: New UP coach Bajar sets sights on Final Four)

“Let’s start with a positive mindset at the same time let’s be positive that we can achieve our goal. It’s hard to set a goal when you don’t believe you can achieve it,” he added in Filipino.

Bajar admitted it was not easy altering what had already become a yearly tradition for the Diliman-based crew, and until now just days before the season begins, confidence and proper mindset are still questionable.

“To make them see or realize that they can win. That’s what we’re trying to cure so far,” Bajar noted.

But the Maroons, who mustered just one win in the last 3 years, had a productive extended offseason as they became champions of the inaugural FilSports Basketball Association (FBA) last June, besting regional schools in the grassroots amateur league.

Later on they traveled to Taiwan and participated in a pocket tournament, where they won 3 out of 4 games against Taiwan universities of the same age group and a university from France, whose players Bajar described as very tall.

Those critical wins did plenty for the Maroons’ morale.

“We came back from Taiwan and we actually had a taste of how special we can really be for this coming season,” Gallarza said. “So we just hope to bring that to UAAP.”

“We learned how to win in the last FBA season and in Taiwan. So for me it’s consistency,” added Batang Gilas’ Diego Dario, who will be in his second year for UP this season. “Every game we need to learn something, even if we win, there’s something to learn.”

A football player to begin with, Kone still has much to learn about the game. And he’s an eager student.

Kone has been in the Philippines for 3 years and was previously with La Salle before transferring to UP. His first participation in a league was at this year’s FilOil preseasoun tourney and the FBA simultaneously. But it was cut short after he popped his shoulder during a game. He now wears a protective strap.

“What I need is get more experience because I’ve been here for 3 years and I never played any league,” Kone said. “I need to learn. If anybody wants to teach me something I’m willing to learn.”

At 6-foot-10 and playing the center position, Kone is lanky and quick. His footwork can certainly still improve but he’s got a good grasp of the fundamentals. He will have to bulk up to bang bodies with other big men but he’s not intimidated at all.

“What I can bring to my team right now is defense, play hard for them and get more rebounds and help them to move forward,” he added. “What they need from me right now is getting rebounds and blocked shots. Scoring is just an option.”

Leaders to rely on

Bajar will also have at his expense comebacking Jett Manuel, who missed the last two years as he focused on his studies as a civil engineering major. The 22-year old shooting guard is an incoming fourth year and is expected to take on a leadership role.

Backing him up are national team vets Dario and Paul Desiderio, as well as Gallarza, Henry Asilum, and Mark Huruena.

“Jett Manuel is a big help to us. He’s one of the bigger pieces of this puzzle,” Bajar said. “We will rely on him at the same time guys like Paul Desiderio and Diego Dario.”

Dario will likely fill the shoes of reigning Rookie of the Year Kyles Lao after he suffered an ACL injury in the summer and will miss the entire season.

“Every day I’m working on my leadership in the team. And of course fundamentals. It all boils down to fundamentals,” said the 5-foot-8 point guard, who played only about 9 to 10 games last season because of national team duties together with Desiderio. They competed in the U-16 and U-17 FIBA Asia and FIBA World competitions.

Gallarza is looking forward to being the leader that can help the Maroons achieve one thing and one thing only.

“Wins,” he sighed, shaking his head. “Everything aside, I don’t care if I play 5 minutes a game or two minutes a game, as long as the team is winning and UP is happy and there’s smiles all over campus, that’s it really. At the end of the day that’s all that matters, winning.”

This coming season, UP is focusing on defense and moving the ball faster. Executing defensively is the main point of emphasis during training with the coaching staff meticulously pointing out holes and miscues.

They also practice sets and skills aimed to counter other teams’ height advantage and at the same time train long hours in a test of endurance.

“It’s our defense,” Dario shared what he thinks is UP’s X-factor this year. “Actually that’s the difference from last year to this year, we’ve been working on our defense and we’ve been giving importance to that end of the court.”

As the Maroons dream bigger dreams for Season 78, the hype and pressure begin to press from all sides. People know the program is being rebuilt. It is no secret they already have financial support.

As Manuel put it, “we feel it as a team. People from the outside are recognizing that we’re doing something different, we’re playing better.”

And that in itself is one more wave they must ride.

“I’ve been through that before so I don’t want them to be blinded, I just want to get the energy going,” Manuel explained. “We don’t want to really think like, yeah people are saying we’re going to play a lot better, and then that’s what we bank on. We just keep working and it’s going to be exciting this year.”

The Maroons have another blank canvas to work with in Season 78. They are better-equipped. And there is steelier resolve resounding from the coach down to the last player on the bench. Will change finally happen this year? 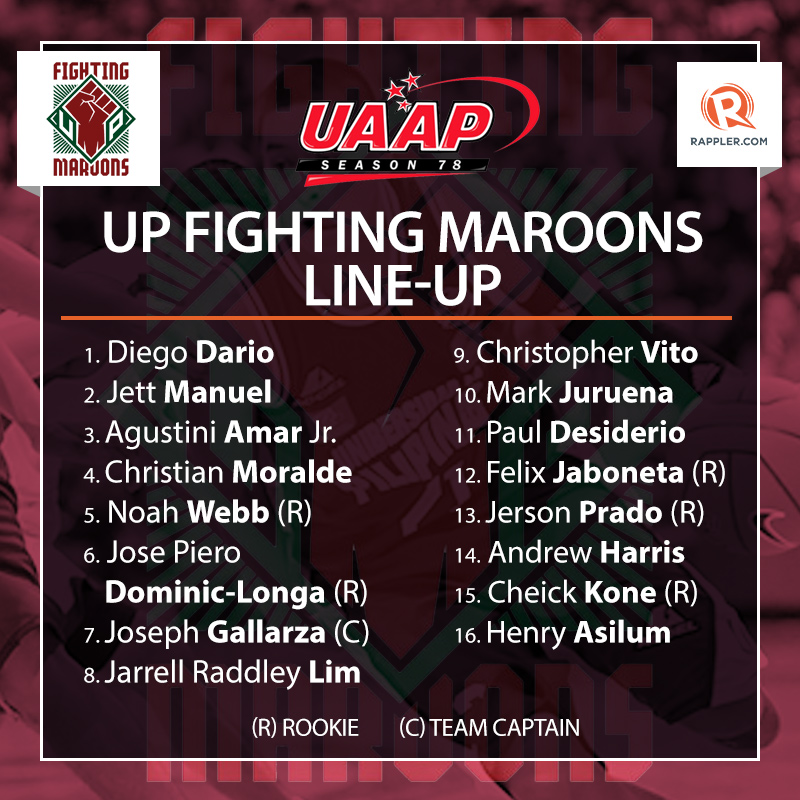 Read and watch other UAAP previews: