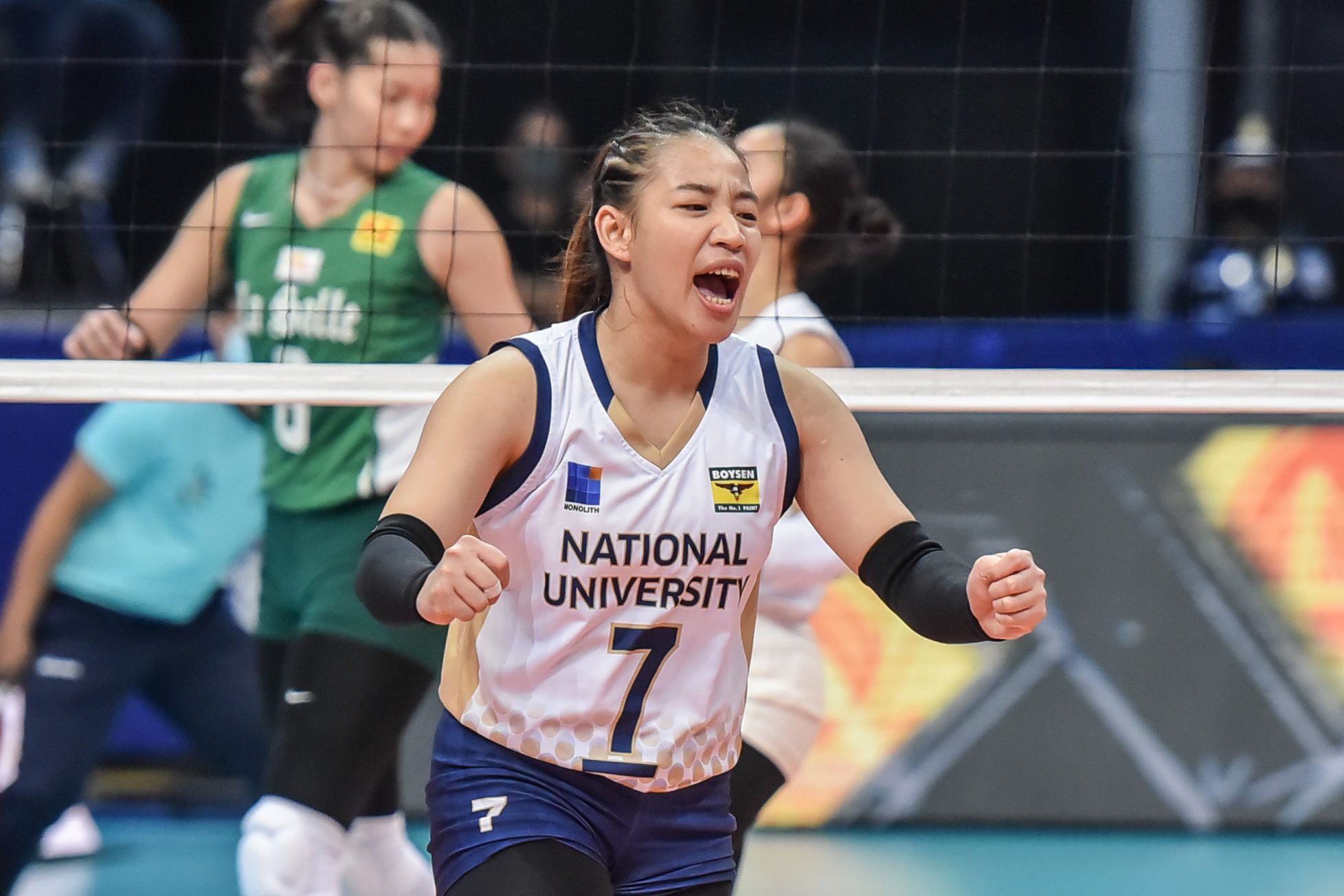 TONE-SETTER. Ces Robles scores 8 of her 17 points in the first set of NU's sweep over La Salle

MANILA, Philippines – The NU Lady Bulldogs continued to run roughshod through the UAAP Season 84 women’s volleyball tournament with a 25-21, 25-20, 25-17 statement sweep of the La Salle Lady Spikers at the Mall of Asia Arena on Thursday, May 26.

Ces Robles set the tone by scoring 8 of her 17 points in the first set alone as the Lady Bulldogs stretched their spotless season run to 8-0.

Bella Belen backstopped the balanced effort with 14 points off 10 attacks, 3 aces, and a block plus 10 excellent digs, while Jen Nierva shored up the defense with 20-of-27 excellent digs and 10 excellent receptions.

From down 7-12 in the second set, the Lady Bulldogs regrouped and seized momentum for themselves after outscoring the Lady Spikers, 18-8, for a 25-20 finish, and a commanding 2-0 set lead.

La Salle only got as near as 8-10 in the third frame before some timely Sheena Toring aces coupled with a few more Belen attack points hiked NU’s advantage up to 17-8 off a game-sealing 7-0 blitz.

Ivy Lacsina then peaked the lead to 11, 23-12, before Robles sealed the deal with a drop shot to end the Lady Spikers’ comeback attempt at 25-17.

“Like what I said in the first round, we cannot be complacent,” said NU head coach Karl Dimaculangan in Filipino. “Even though we swept [the first round at 7-0], the second round is a new round. It’s a challenge for us and we know it will be difficult, but the players worked hard to get the win.”

Only middle blocker Thea Gagate breached double-digit scoring for La Salle with 10 points off 7 attacks and 3 blocks in the sorry loss. Super rookie Leiah Malaluan got silenced to just 7 markers while veteran Jolina dela Cruz only scored 3 as the Lady Spikers dropped to 5-3 in third place.

NU shoots for its ninth straight win against up-and-down defending champion Ateneo on Saturday, May 28, 4 pm, while La Salle looks to vent its ire on lowly FEU in the 6:30 pm main event. – Rappler.com