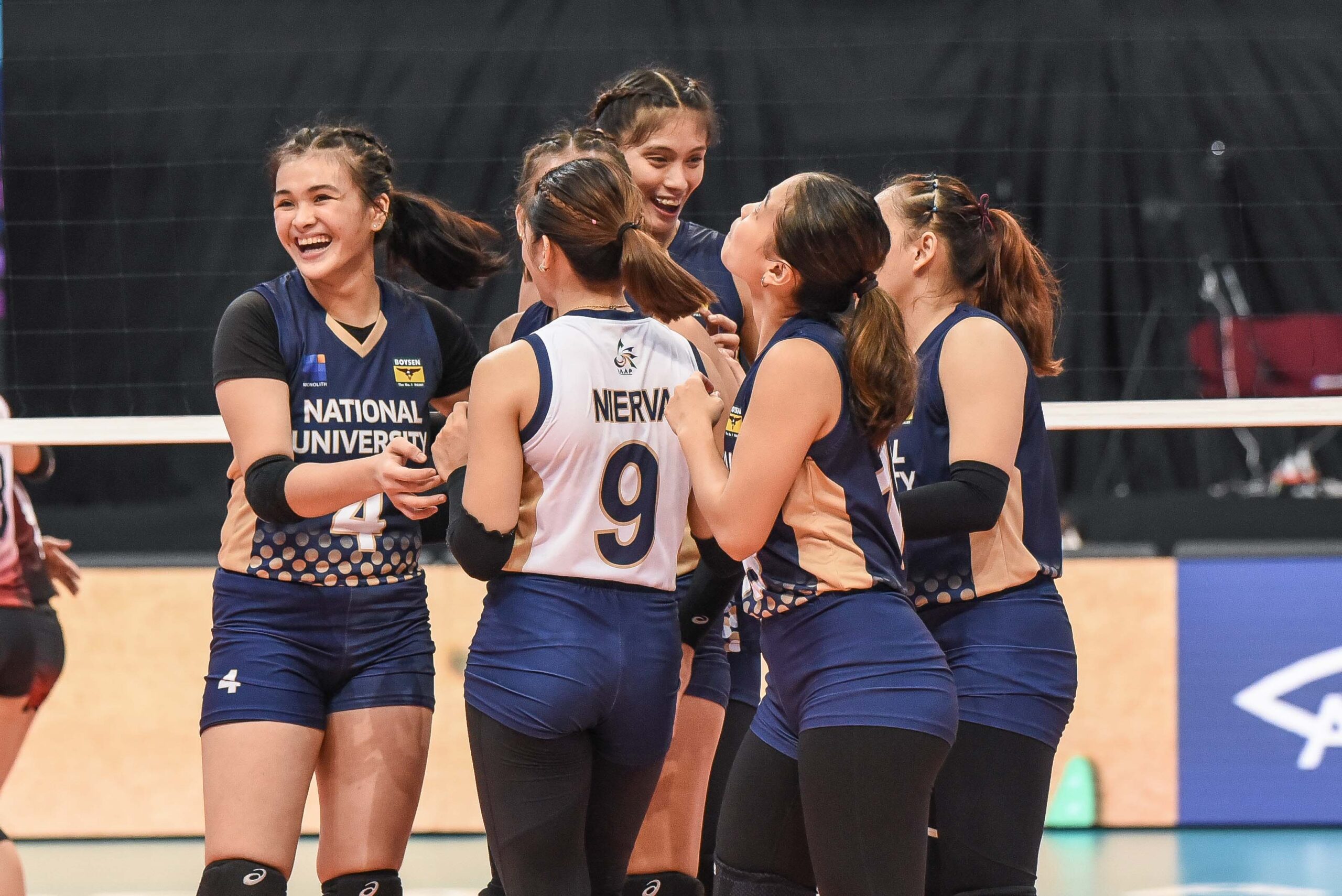 UNBEATEN. Mhicaela Belen (left) and the NU Lady Bulldogs flex their might early.

Facebook Twitter Copy URL
Copied
Rookie Mhicaela Belen leads the talented NU crew to a seven-game sweep of the first round, while Adamson closes out with a win for a 4-3 slate

MANILA, Philippines – National University extended its unblemished streak to seven games – its best start in school history – as the Lady Bulldogs overpowered the UP Fighting Maroons, 25-10, 25-20, 25-15, in the UAAP Season 84 women’s volleyball tournament, Thursday, May 19, at the Mall of Asia Arena.

Mhicaela Belen fired all of her 13 points off attacks and Cess Robles added 12 points to lead the Lady Bulldogs, who surpassed their previous best 6-1 start set in Seasons 76 and 80.

(We needed this win going into the second round to build momentum, so we could prepare for a much difficult second round.)

UP zoomed to a 6-1 start in the third set, but the ever-composed NU responded with a 20-5 counter-blitz to build an insurmountable 21-11 lead en route to the win.

After a forgettable first frame, the Fighting Maroons were able to keep in step with NU in the second, trailing by just three late, 20-23 after a 5-1 UP run.

But Robles and Erin Pangilinan closed the door with back-to-back hits to put NU a set away from the sweep.

Middle blocker Ivy Lacsina chipped in 11 points while libero Jen Nierva held the fort in defense with 17 excellent digs and 7 excellent receptions. She even scored a point off a free ball.

No UP player scored in double figures as Niña Ytang and Jewel Encarnacion tallied 7 points apiece.

After a hot three-game winning streak to start the tournament, the Fighting Maroons closed out the round with four straight losses to drop to sixth at 3-4.

Lorene Toring delivered 14 points on 10 attacks and 4 blocks, a big improvement from her one-point tally last Tuesday, as the Lady Falcons wrapped up the first round at 4-3, good for solo fourth.

May Ann Nuique topscored for Adamson with 15 points including 4 blocks, while Rizza Cruz had 10 points.

(I told them let’s accept our loss to UST, each one learned a lot of lessons. All the mistakes we made then, let’s correct it here.)

Trailing 6-7 in the early goings of the third set, the Lady Falcons unleashed a 9-1 blast to establish a seven-point cushion on the way to a 25-18 tally for the win.

The Lady Falcons came back from a 19-22 deficit in the first period with a 6-2 spurt, capped by Toring’s quick kill, for the early advantage, 25-23.

After back-to-back points by UE, Nuique and Toring buried consecutive points to give their side a commanding 2-0 set lead, 25-20.