TITLE DEFENSE. Naomi Osaka hopes to get back into form in the US Open.

Naomi Osaka came to Flushing Meadows to entertain and did not disappoint on Monday, August 30, overcoming a slow start to beat Czech Marie Bouzkova, 6-4, 6-1, and get her US Open title defense under way in front of a roaring capacity crowd.

Unseeded Bouzkova held her own through much of the first set but failed to convert on four break point opportunities against the Japanese four-time Grand Slam winner.

Osaka, who fired 21 winners but committed 13 unforced errors in the first set, broke Bouzkova’s serve at 5-4 to win the opener and never looked back, winning the first five games of the second despite struggling with her first serve.

The world No. 3 closed out the match with a forehand winner, offering a smile and a wave to the stands that were empty a year ago.

“I’m the type of player that wants to entertain a crowd as well. I think last year I was just really business,” she said.

“I wouldn’t try to hit a crazy serve or anything like that. Of course, I’m only one match in here and I don’t think I’ve gotten that distracted yet.”

Osaka’s only previous meeting with Bouzkova came at the first round of the Australian Open in 2020, where she also won in straight sets.

“I thought today’s match was really tough. I haven’t played her in a while. I guess just to be able to be the first night match and to win in two sets was really important to me,” she told reporters.

US Open unfolds amid a new era for players’ mental health 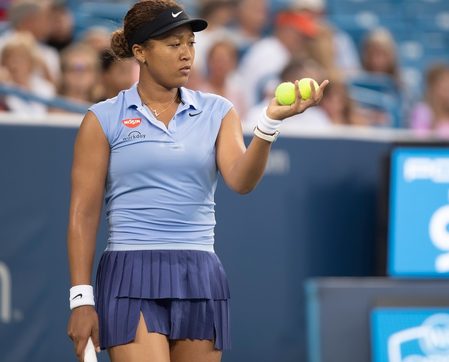 In the run-up to the year’s final major, much of the talk around Osaka focused on her inconsistent play and relative lack of time on court as she crashed out in the third round of the Tokyo Olympics and the Western & Southern Open.

But the match marked a reassuring return to form for the 23-year-old, who looks the likeliest candidate to upset world No. 1 Ash Barty on the New York hard courts.

Osaka, who had her powerful forehand dialed in and held Bouzkova to just 10 winners in the entire match, said she felt at home at Arthur Ashe Stadium, where she won her first major title three years ago.

“I’m always nervous during the first round in a Slam,” said Osaka.

“It felt kind of surreal to walk onto the court and to hear an actual audience this time. To see people and to hear their energy, because last year the automated crowd noise was kind of the same all the time.

“But here, people are reacting in real time, so it was cool.” – Rappler.com