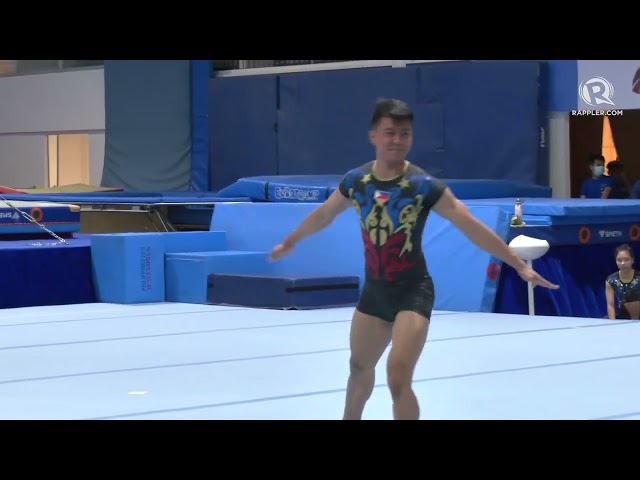 Yulo, who is based in Tokyo, Japan, arrived in Manila last Tuesday to witness the unveiling of the national team’s new home together with his coach Munehiro Kugimiya and International Gymnastics Federation’s (FIG) president Morinari Watanabe.

(In the pandemic, they stopped training for one or two years. I’m very thankful that they built this, so they can train again.)

A 2,300-square meter warehouse in Intramuros was transformed into a national training center, which will house the new equipment and gear of the artistic, aerobic, and trampoline squads.

In Manila, Yulo spent time with his family and reunited with his teammates from the national team. He leaves for Tokyo, Japan on Sunday, March 6, for his graduation from Teikyo University.

(I had dinner with my family and that’s the only thing I could do because I also practiced here. It’s only a short break because I’m returning for my graduation.)

Yulo is in for a jam-packed year as he will be participating in the Vietnam Southeast Asian (SEA) Games in May, the 2022 Hangzhou Asian Games in September, and the world championships in Liverpool, United Kingdom in October. – Beatrice Go/Rappler.com