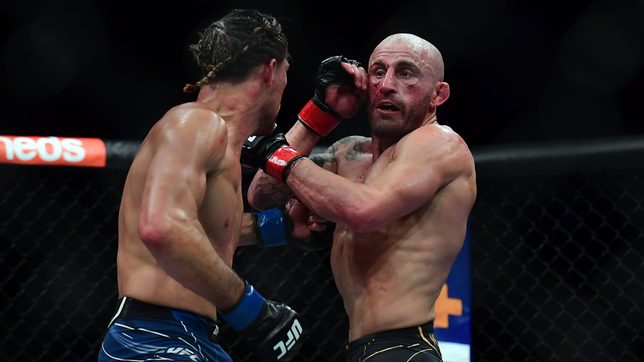 In a five-round war of attrition, Volkanovski had the better of the opening two rounds before explosive activity in the third saw the champ survive two choke attempts to unleash a merciless storm of punches on Ortega, who barely made it to the end of the round.

Californian Ortega went for another choke early in the fourth and once again Volkanovski was able to reverse the position to land thunderous blows from the top, but again Ortega survived.

Behind on the judges’ scorecards, Ortega had no choice but to swing for the fences in the final frame, but Volkanovski gutted out the last five minutes to take the decision and retain the belt.

In the co-main event, flyweight challenger Murphy was no match for Shevchenko, and the 33-year-old from Kyrgyzstan completely outclassed the American before securing a TKO finish on the ground with a minute remaining in the fourth round.

In one of the most anticipated bouts on the card, fan favorite Nick Diaz made his return to the octagon after an absence of more than six years, but the 38-year-old lost his middleweight fight with Robbie Lawler by third-round TKO.