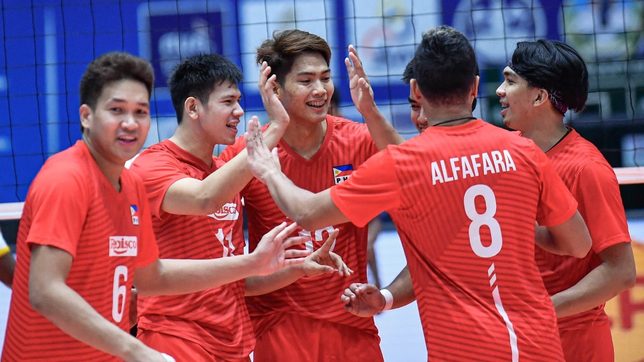 An attack error gifted Rebisco a crucial four-point lead in the neck-and-neck final set, 10-6, and a service error gifted the match point to Rebisco before top scorer Jao Umandal wrapped it up, 15-11.

Umandal capped his tournament-long brilliance with 28 points, the last on a match-sealing kill. The University of Santo Tomas standout also had 5 blocks and 3 service aces.

“After this, I know we need to work on our composure and on our focus on everything we do,” said De Guzman.

Mark Alfafara also had 8 points in two sets before sitting out the rest of the two-hour and 18-minute match.

In the women’s side, Choco Mucho wound up at sixth place, while Rebisco finished seventh and last.

The tournament was the Philippine volleyball teams’ first international stint since the 2019 Southeast Asian (SEA) Games.

Rebisco’s opening-set performance fueled the team’s hope as it cruised to a 10-point lead at set point, 24-14, before sealing it for a 1-0 advantage.

But things turned in the second frame as three straight attack errors from Rebisco allowed CEB to pick up steam and take a two-point lead, 13-11.

The Filipinos tried to bounce back midway when it won a challenge to tie the score at 19-all, but the Sri Lankans regained their momentum to claim the set, 25-22, and equalize the match at 1-1.

Rebisco got off to a dominant 6-0 start in the third set and managed to sustain the lead and win the frame, 25-18, to move within a set from claiming the match.

The back-and-forth action, however, returned in the fourth set and CEB later cruised to a five-point advantage, 18-15.

As CEB reached 24-18, the Philippine squad attempted to stage a rally by saving three set points before the Sri Lankans finished off the set to extend the match to a decider.

“This is our first exposure and we hope to become better for the next edition,” said Philippine head coach Dante Alinsunurin.

“We are hopeful for the continued rise of the level of Philippine volleyball on its return to the international scene.” – Rappler.com