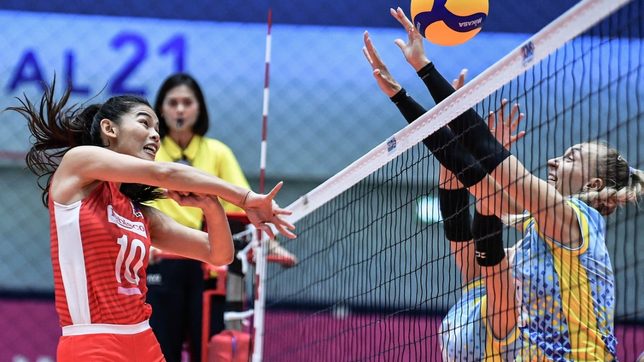 STEPPING IN. Majoy Baron from Choco Mucho transfers to the shorthanded Rebisco squad.

With the straight-set victory, the Kazakh club shoots to the top of Pool B followed by Thailand’s Supreme Chonburi, Saipa Tehran at third place, while Rebisco lands at the bottom of the standings.

Not present in the game were captain Aby Maraño, Dindin Santiago-Manabat, Eya Laure, and Ivy Lacsina due to health protocols, forcing Majoy Baron and Kianna Dy to transfer to the Rebisco lineup from Choco Mucho.

The young squad managed to keep up with the Kazakhs in the opening set, but suffered a beating in the second frame when the latest champion of the Kazakhstan volleyball league led by 11 points, 15-4.

But Rebisco got their groove early in the third set when it led by one, 6-5, before Altay rallied with a 4-0 run to take the lead once again.

The Kazakhs proved too powerful for the Philippine squad, spoiling the coaching debut of Brazilian Jorge Souza de Brito.