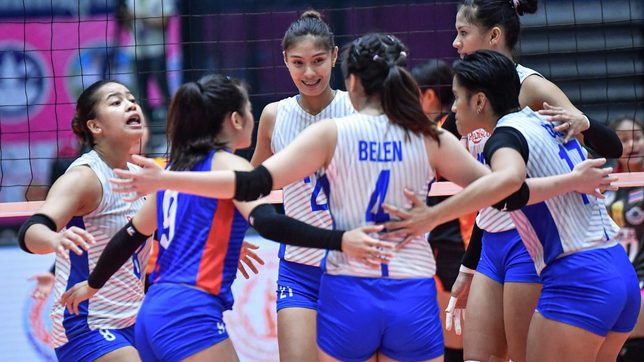 LOSING STREAK. Rebisco is still looking for its first win of the tournament.

Rebisco failed to clinch a semifinal berth as it lost to host Nakhon Ratchasima QminC in the 2021 Asian Club Volleyball Championships on Monday, October 4 in Thailand.

Despite missing a key cog, the home squad steamrolled past Rebisco in straight sets, 25-11, 25-19, 25-18, in the quarterfinals of the women’s tournament.

The loss relegated Rebisco to the classification round on Wednesday, October 6, while Nakhon Ratchasima advanced to the semifinals where it will face the winner between Choco Mucho and Supreme Chonburi.

Even without star setter Tomkon Nootsara playing for the home team, the Philippine squad was overwhelmed by the four-time Thailand League champions in the opening set as it staged a massive 10-1 run to easily take the first-set advantage.

Rebisco showed more resilience in the second frame and managed to cut a 12-point lead to seven with a mini 3-0 run towards the end of the set, 15-22.

But with the Thais wielding control, Rebisco surrendered a 2-0 match lead despite managing to save two set points.

The young members of the Rebisco squad, though, showed they were capable of keeping up with the Thai powerhouse as Lacsina helped the Philippines take a one-point lead, 11-10, in the third set.

But the Thais quickly responded and a crucial service error from Dindin Santiago-Manabat gave Nakhon Ratchasima a three-point edge, 17-14, which shifted the momentum back to the Thais, who pulled away with a 5-0 run.

Rebisco made a gallant stand towards the end by saving back-to-back match points before the home squad sealed the win. – Rappler.com