Rondina, Pons give Kiwis a scare in AVC beach volley 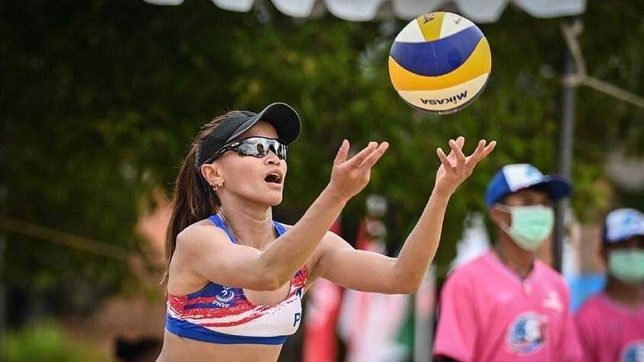 Sisi Rondina and Bernadeth Pons fell short of pulling the rug from under a taller and more experienced New Zealand, which pulled off a shaky 2-1 win over the Philippines in the Asian Volleyball Confederation Continental Cup semifinals in Nakhon Pathom, Thailand, on Friday, June 18.

The tried and tested Rondina-Pons tandem hacked out a 21-12, 17-21, 15-9 upset win over Francesca Kirwan and Olivia MacDonald, giving hope to a Philippine side that earlier saw its bid in the men’s side quashed by Australia.

Dij Rodriguez and Babylove Barbon, however, couldn’t duplicate the victory and bowed to Alice Zeimann and Shaunna Polley, 21-14, 21-13, forcing a golden match or a tiebreaker.

Proving to be the Kiwis’ power of strength, Zeimann and Polley overcame some nervy moments to halt the Philippines’ upset bid with a 19-21, 21-10, 15-12 decision over Rondina and Pons.

Despite the loss, Rondina savored her victory with Pons in the opening duel for the Philippines.

“We still have all the reasons to be happy. We beat New Zealand, we didn’t expect that against experienced veterans,” Rondina said. “Never mind that they were taller, we gave it our best shot and gave our country some exciting moments.”

Only the No. 1 team will earn a ticket to the Tokyo Games.

In the golden match, the Kiwis made a major adjustment by forcing Pons to work more on offense over Rondina to even the match and force a deciding third set.

New Zealand raced to 4-0 and 10-5 leads in the third set but were caught reeling behind Pons’ incursions that pushed the Filipinas to within 9-11.

Sisi and Rondina threatened at 12-14 but the Kiwis held fort and got the win on a Pons service error.

Christopher McHugh and Damien Schumann set the tone for an Aussie victory with a quick 21-11, 21-15 win over Jaron Requinton and James Buytrago in the first match.

Maximilian Guehrer and Zachery Schubert then won the second match via forfeiture as Jude Garcia suffered cramps when he and Anthony Arbasto were trailing, 4-12, in the second set. The Aussies took the first set, 21-11.

The Philippines and Lebanon split their first confrontation, thus sending the duel to a tiebreaker. – Rappler.com