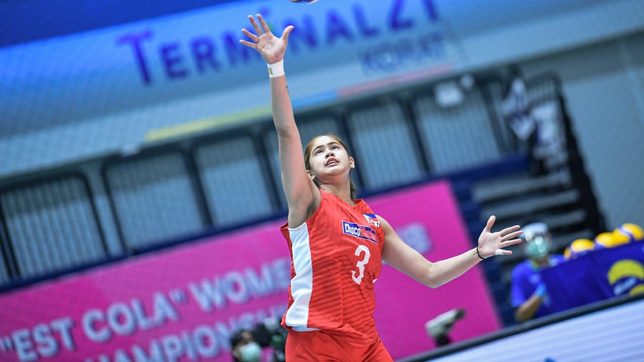 SUCCESSION. Deanna Wong aims to shine in the international stage.

Deanna Wong finally earned her spot as the starting setter of Philippine squad Choco Mucho, but it only marks the start of her maturity as the main playmaker.

“I think we lacked composure individually. That’s what we really need – maturity in the game, on ourselves, as well as working together as a team,” said Wong.

Choco Mucho’s campaign is not over yet as it will participate in the quarterfinals on Monday, October 4, where it will go up against Pool B’s No. 2 seed.

“We would have to improve on these aspects by ourselves every day, added the former Ateneo Lady Eagles playmaker.

But the team had to make a lot of adjustments in the tournament itself.

The team only managed to train for two months, and was without Fil-Hawaiian Kalei Mau, who had a professional stint in Puerto Rico.

Originally part of the Choco Mucho lineup were Majoy Baron and Kianna Dy, but they had to be loaned to Rebisco after four players initially didn’t get health protocol clearance.

Coach Odjie Mamon said Choco Mucho needs to work more on becoming a cohesive team and learn how to ride the momentum every time it presents itself.

“It was quite disappointing that we can play good touches in defense but cannot convert in offense,” Mamon said. “For now, we really have to work on the team’s cohesion and making their teamwork really come out in the game.” – Rappler.com