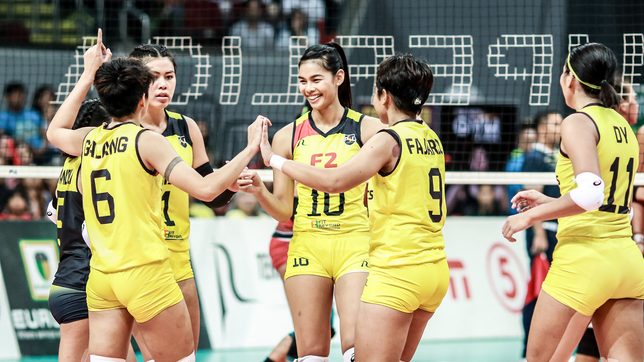 RETURN. F2 Logistics will return to volleyball action for the first time during the pandemic.

Facebook Twitter Copy URL
Copied
Six clubs will compete in the women's tournament, which will open the league's festivities on November 20

Philippine volleyball powerhouse squads F2 Logistics and Chery Tiggo will be among the six teams that will vie for the inaugural Champions League crown as the tournament kicks off on Saturday, November 20, at the Aquamarine Recreational Center gym in Lipa City, Batangas.

The other four squads – PetroGazz, Baguio City, California Precision Sports, and Tuguegarao Perlas Spikers – will compete in the six-day, single round-robin tourney that will end on November 25.

PetroGazz will open the tournament against Baguio City at 10 am, while F2 Logistics, which will make its club volleyball return, will take on California Precision Sports at 1:30 pm.

The 2021 Premier Volleyball League champion Chery Tiggo will battle it out against the Tuguegarao Perlas Spikers to cap the opening day tripleheader at 4 pm.

The men’s tournament, on the other hand, will start on November 29 with a three-match schedule featuring Go for Gold-Air Force against VNS, Sabong International Spikers against MRT-Negros, and Global Remit against Team Dasma Monarchs.

The team with the most number of victories will claim the title, but in a case of a tie, tiebreak rules will apply.

The games will be streamed over iWantTFC for local and international audiences, as well as Smart Sports’ Facebook pages and YouTube channels. – Rappler.com