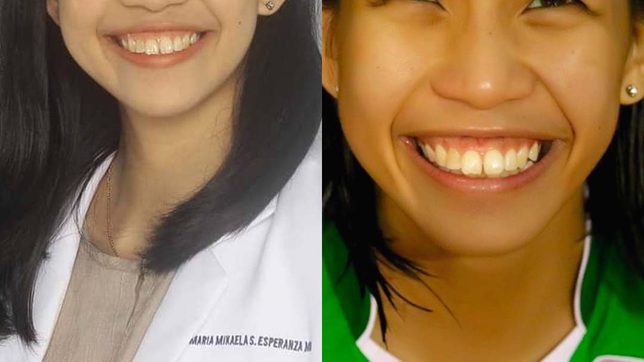 ACHIEVER. Mika Esperanza excels both in academics and sports.

The former UAAP champion setter made the announcement in an emotional social media post where she thanked everyone who supported her on a difficult, five-year journey.

“Thank you for all those who prayed and helped me get where I am today. Thank you Lord,” she said.

The 27-year-old graduated last year with a Doctor of Medicine degree at the University of the East Ramon Magsaysay (UERM) in Quezon City, and trained at the Ospital ng Maynila Medical Center.

After helping the Lady Spikers earn the UAAP Season 78 championship in 2016 alongside fellow graduating stalwarts like Ara Galang and Mika Reyes, Esperanza maintained a student-athlete life by juggling med school with play time in the Philippine Super Liga (PSL).

Prior to fully focusing her time on her studies, she also played alongside some of the country’s best volleyball stars like Michele Gumabao and Denden Lazaro-Revilla with the Cocolife Asset Managers.

She also briefly played with the F2 Logistics Cargo Movers before her move to Cocolife in 2018.