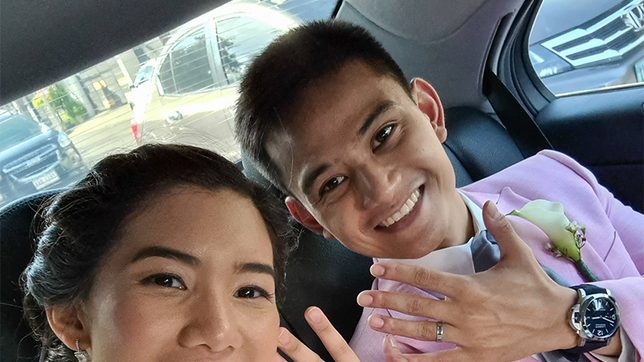 Facebook Twitter Copy URL
Copied
‘I can say, with 100% certainty, that I just married my soulmate,’ says Jia Morado

After more than a year of engagement, volleyball star Jia Morado officially tied the knot with her longtime boyfriend Miguel de Guzman at the Christ the King Parish in Greenmeadows, Quezon City on Thursday, November 11.

“I can say, with 100% certainty, that I just married my soulmate,” said Morado’s caption on her social media posts showing her and De Guzman flashing their wedding rings.

Fans were certainly eagerly awaiting the high-profile event online, as the hashtags #DeGuzmanNaSiJia and #JiaGuel trended.

Engaged since October 2020, Morado and De Guzman first met while studying in Ateneo, and have been together since graduating as batchmates in 2017.

The culmination of their years-long partnership is certainly a welcome development for Morado, who has no doubt gone through a challenging year as an athlete.

Shortly after her Creamline Cool Smashers team lost in the 2021 Premier Volleyball league (PVL) finals to the Chery Tiggo Crossovers, she and longtime teammate Alyssa Valdez were left out of the national team pool due to what has been called a “youth” movement.

Prior to that, the three-time PVL Finals MVP also skipped tryouts for the national team after citing health and safety concerns.

Despite a difficult stretch for her career in the midst of the pandemic, Morado still got the highlight she wanted in the end, after all, and is now looking for a bounce-back year in 2022. – Rappler.com