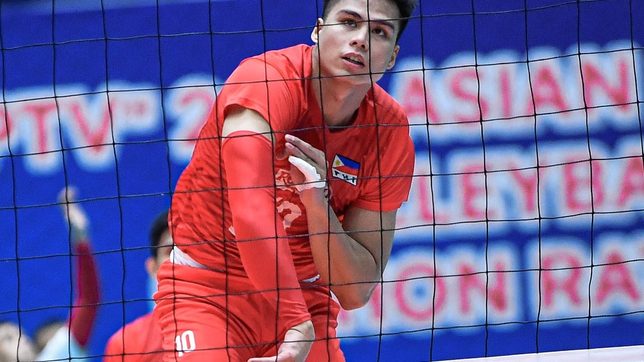 And this time, the veteran hitter is confident that the national team has finally gained a bit of respect at the international level of competition.

(Like what our coach said, back then, the Philippines was always underrated in international events. But now, it’s different. That’s one of our goals: to earn respect every time we compete internationally.) De Guzman was part of the national team’s fairy tale run in the 2019 Southeast Asian Games in the Philippines, where they dethroned the powerhouse team of Thailand before settling for a silver-medal finish.

The Philippine team mainstay hopes that all the delayed developmental plans and tournaments from 2019 will continue in order to recruit future talents and keep the program running.

(Tournaments and training are very important for us. I hope that all the delayed programs from 2019 can start now since we’re going back to normal. And hopefully, we can recruit better and taller players.)

De Guzman remains one of the core players of men’s volleyball as he recently saw action in the 2021 Asian Club Volleyball Championships in Nakhon Ratchasima, Thailand.

Although team Rebisco finished the tournament with just one win, De Guzman said the experience against tough Asian teams can help the country, especially in the next SEA Games.

(We’re very happy because we were able to compete against Olympians. That’s a good experience for the national team and hopefully, we can apply that in SEA Games.)

For now, De Guzman is ready to pass the torch to the next generation of players as he expects the future men’s volleyball team to exceed what they have achieved.

(Our goal is to make men’s volleyball bigger. Even if we can’t achieve our goals now, hopefully, the future generation can.) – Rappler.com