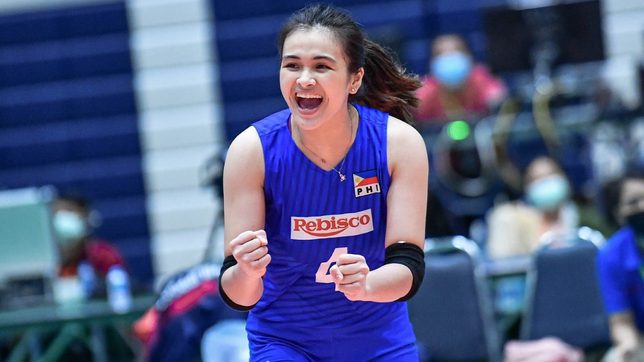 Facebook Twitter Copy URL
Copied
Tagged as one of the country’s future volleyball stars, 19-year-old Mhicaela Belen proves she can juggle school and sports during her international debut

Taking exams is already tough, but taking school tests right after an international match is even more impressive.

Rebisco’s Mhicaela Belen shared she had to attend class and take exams during the national team’s stint in the Asian Volleyball Club Championship last October 1 to 7 at Nakhon Ratchasima, Thailand.

(I attended online classes during our AVC campaign. One time, I had to take an exam after our game.)

The 19-year-old student-athlete from National University, who recently debuted for the Philippine team, is one of the bright spots in Rebisco’s underwhelming campaign in Thailand. Belen posted double-digit scores in several games, but they’re still not enough to lift her team from a seventh-place finish.

For Belen, the national team needs more time to train and play together in order to compete for a podium finish.

(We need to work on our chemistry. Some teams have been training for so many years but our team barely trained together prior to the competition.)

Belen had nothing but praise for Team Rebisco’s Brazilian tactician.

(Coach Jorge is a good teacher. He trains and bonds with us. He tells us how volleyball should be played.)

The Lady Bulldog standout received praise and gained fans, including volleyball star Alyssa Valdez herself, for becoming one of Rebisco’s main sources of firepower.

Now tagged as one of the country’s future volleyball stars, Belen said she appreciates all the compliments and aims to bring her national team learnings to the UAAP.

(I’m flattered. But that’s not my best performance yet. There’s a lot to improve. I hope I can use this AVC experience in my UAAP journey.) – Rappler.com