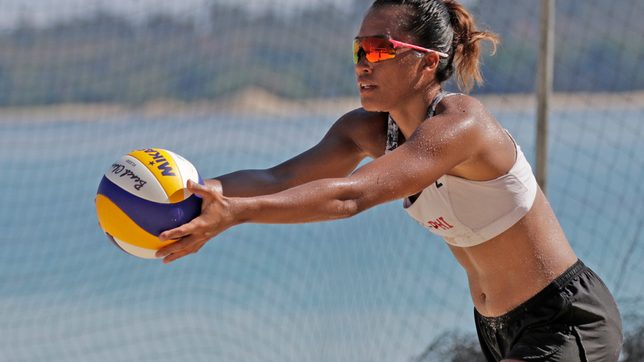 The players left for Thailand on Sunday, June 13, to compete in the event that offers tickets to Tokyo for the top men’s and women’s team.

The top duo of Sisi Rondina and Bernadeth Pons will lead the country’s campaign in the women’s side along with Dij Rodriguez and Babylove Barbon. Mer Jauculan and Gen Eslapor are set as reserves.

Dzi Gervacio, who boosted the team’s bronze medal campaign in the 2019 Southeast Asian (SEA) Games beach volleyball tournament, was forced to skip the tournament because of a left knee injury

The men’s squads will be composed of the pairs Jaron Requinton and James Buytrago, and Jude Garcia and Anthony Arbasto. Ranran Abdilla and Philip Bagalay are alternates

This will be the country’s first international competition for a national volleyball team since the SEA Games, where both beach volleyball teams won bronze.

“We are hoping for a strong finish for our men and women beach volleyball teams in this Olympic qualifier,” Philippine National Volleyball Federation (PNVF) president Ramon “Tats” Suzara said. “Our athletes are adequately prepared for the competition, having set up a training camp in Pagudpud since last month.”

The Philippines will face Japan, New Zealand, and Sri Lanka in the women’s contest with the top two teams advancing to the final phase from June 25 to 27.

The men’s teams will face Australia, Japan, Kazakhstan, and Lebanon. The No. 1 men’s team will also advance to the third and final round of the qualifiers.