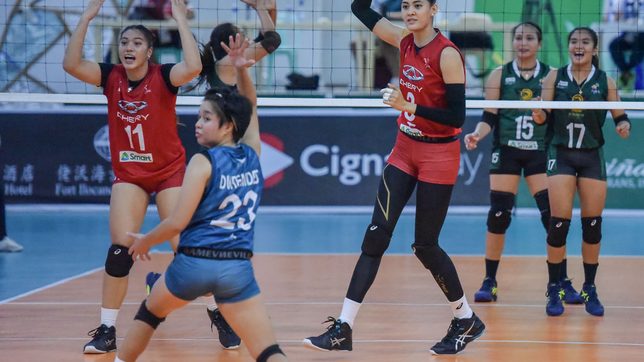 OUT. Chery Tiggo star Jaja Santiago (right) and her teammates signal that the Army attack should be counted out.

Facebook Twitter Copy URL
Copied
Jaja Santiago and Chery Tiggo have shifted to a higher gear, and so far have only dropped one set in their last three wins

The Chery Tiggo Crossovers continued their warpath through the 2021 Premier Volleyball League Open Conference with a straight-sets domination of the Black Mamba Army Lady Troopers, 25-16, 25-16, 25-21, on Wednesday, August 4.

Ever since losing a five-set heartbreaker to the Sta. Lucia Lady Realtors, Chery Tiggo has shifted to a higher gear, and so far has only dropped one set in their last three wins en route to a 6-2 record.

Left in the dust by the Crossovers’ cruise lie the Lady Troopers’ playoff hopes, which have officially been dashed as they slid to a 2-5 slate for the conference.

The Santiago sisters once again led the attacking charge, with Dindin Manabat tallying 18 points off 15 attacks, and Jaja adding 15 markers with 12 spikes.

Shaya Adorador, meanwhile, went on a service ace spree, and finished with 7 points off 5 aces, and 16 excellent digs to boot.

After identical 16-25 losses in the first two sets, the Army veterans shored up their resolve in the final frame with their playoff hopes on the line.

From down 7 points, 13-20, Jovelyn Gonzaga led the 7-3 comeback, and got as near as three points, 20-23. However, Chery Tiggo was simply too close to the finish line, as a Manabat hit and an Adorador closeout drop ended the Lady Troopers’ charge for good.

Gonzaga led the Army’s last stand with 11 points, and 12 excellent digs, while Royse Tubino chipped in 8 markers off 7 attacks.

Despite the new schedule that further compressed games together, the Crossovers will still get two days off as they finish off the elimination round with a blockbuster Saturday, August 7 match against the Choco Mucho Flying Titans at 7 pm.

The Lady Troopers, meanwhile, will only have a night’s rest to recover before they again suit up for action against the also-ran Perlas Spikers on Thursday, August 5, 4 pm. – Rappler.com