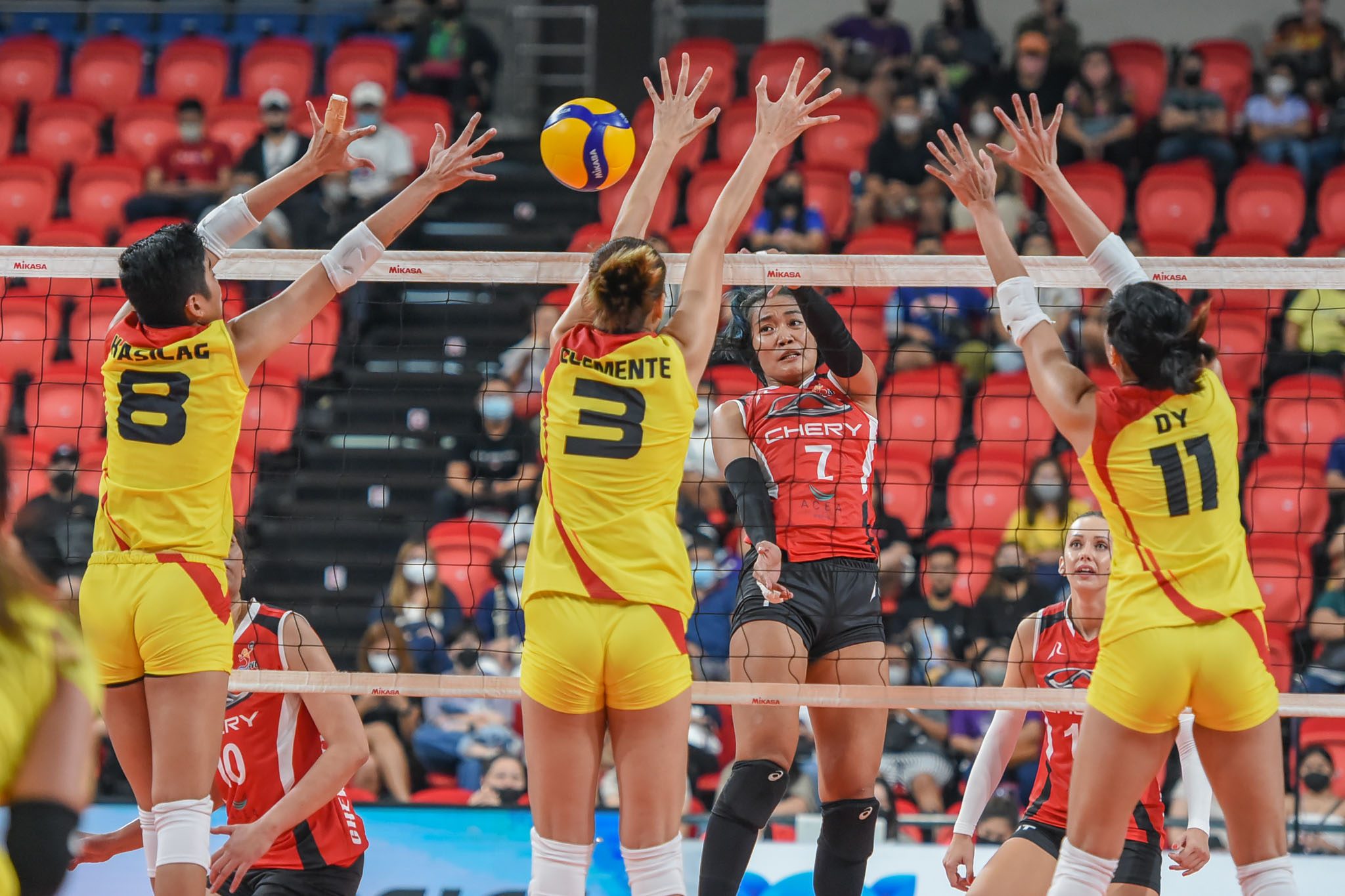 MANILA, Philippines – Chery Tiggo rode on a big first-set fightback against F2 Logistics to grab a share of the early lead in the Premier Volleyball League Reinforced Conference.

“As long as our locals will perform, and with the help of our import, I always believe that we could win,” said Chery Tiggo coach Clarence Esteban. “We had a good start and we worked on our strategy not to make it close in the end.”

Laure fueled the Crossovers’ strong start and finished with 11 points to back up skipper Paat’s team-high 16-point output.

Kalei Mau led F2 Logistics with 20 points while Kim Dy and Ivy Lacsina combined for 16 points as the Cargo Movers battled the Crossovers to a tight 43-44 duel in attacks but yielded 26 unforced errors, 9 more than their rivals.

The Cargo Movers suited up without American reinforcement Lindsay Stalzer due to health and safety protocols although the locals showed they’re more than capable of taking the Crossovers head-on, controlling majority of the opener, only to crack in the face of the latter’s furious rally.

With the victory, Chery matched PLDT and Cignal’s opening-day wins for a share of the early top spot.

Their impressive run also more than showed what a healthy Chery Tiggo side could offer after the Crossovers struggled in the recent Invitationals due to the absence of key players, including leader Dindin Manabat and the heavy-hitting Laure.

The Crossovers closed out with 7 straight points to snatch the opening frame with Laure capping their stirring comeback with three straight blasts – the last hitting the net but drawing two F2 defenders, leaving the ball undefended when it dropped to the Cargo Movers’ frontcourt.

After the first-set thriller, the inaugural pro league champions kept pounding the Cargo Movers’ defense in the next set behind Paat, Laure, Czarina Carandang, and Montenegrin import Jelena Cvijovic while coming up with good passing, digging, setting and blocking.

They then pulled through in a back-and-forth third set skirmish to complete the straight-set win in one hour and 27 minutes.

“We stuck to the game plan and we made the necessary adjustments,” said Laure.

Chery Tiggo also cashed in on F2 Logistics’ miscues, scoring 9 off the Cargo Movers’ unforced errors while yielding 5 of their own to gain the head-start.

“Going from top to bottom, that’s what motivated us,” said Chery Tiggo playmaker Jasmine Nabor, referring to the team’s dismal drop from being a champion in 2021 to an eighth placer in this year’s Open Conference. “We also kept trusting each other in and outside of the court.”

The Cargo Movers, also hounded by health issues that forced them to skip the Invitationals after a sixth-place finish in the Open Conference, kept it close in the third but lost steam in the stretch, enabling the Crossovers to pull away at 17-14 before all but settling the issue at 23-16.

But the Cargo Movers proved they’re far from being finished, taking 5 of the next 6 points, including 3 saved match points before blowing it all on a failed passing play.

The locals actually took the scoring cudgels for Chery Tiggo as Cvijovic finished with just 6 points although she produced 7 excellent digs and 10 excellent receptions.

Petro Gazz matched Chery Tiggo’s romp with its own version of a sweep but via the hard way, tripping Choco Mucho, 27-25, 25-22, 28-26, in the second game through sheer power and poise anchored on closer Lindsey Vander Weide and local ace Jonah Sabete.

The Angels blew 3 match points but pulled through as Choco Mucho import Odina Aliyeva served into the net and fired a hit in the ensuing play that likewise failed to clear the center line, enabling the 2019 champions to squeak out the tough win that forced an early four-way tie for the lead among PLDT, Cignal, Chery Tiggo and Petro Gazz.

The Angels’ American outside hitter delivered the last two points for the Angels in the opening set, hammering in a kill and targeting Choco Mucho’s short middle defense with an off-speed hit to clinch the extended encounter that was close throughout.

Vander Weide also closed out the second frame with an off-speed hit and banged in clutch hits in the third that also saw the diminutive but power-hitting Sabete step up and provide key shots that stood out at endgame.

It was a sorry setback for the Flying Titans, who controlled the early going of the first two sets but failed to neutralize the Angels’ late stretch rallies.

Choco Mucho also took charge in the third, 10-7, but Petro Gazz racked up 9 straight points before wavering, allowing the Flying Titans to send it to a tense-filled ending.

Petro Gazz had three shots at match point but Choco Mucho fought back on all occasions on Aliyeva’s kill, Sabete’s attack error and Maika Ortiz’s running attack, until Choco Mucho’s reinforcement wobbled with that faulty serve and a flawed attack.

Vander Weide topscored for Petro Gazz with 25 points in a superb performance that could make a strong case for the Best Import award this early although Aliyeva outscored her with 26 points in a losing stand. – Rappler.com