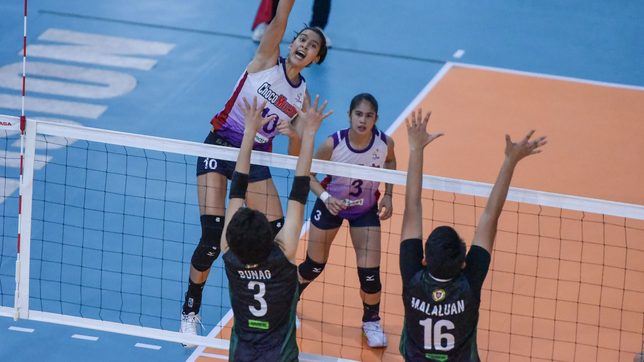 The Choco Mucho Flying Titans continued their dominant run through the 2021 Premier Volleyball League Open Conference with a straight-sets 25-19, 25-23, 25-19 sweep of the Black Mamba Army Lady Troopers on Monday, August 2.

In just six games with as many wins, the undefeated Titans already matched their win total in last year’s conference, where they went 6-10, and have inched closer to a semifinals berth. Meanwhile, the Lady Troopers slid to a 2-4 slate.

Kat Tolentino again led the way in scoring with 18 points, all off attacks, for Player of the Game honors. Maddie Madayag chipped in 11 markers with 6 spikes, 4 blocks, and an ace, while Deanna Wong added 14 excellent digs in 20 attempts to go with 16 excellent sets.

After dropping the first set, Army regrouped in the second set and led past the midway point, 17-13. However, Choco Mucho bounced back and snuck past for a commanding 2-0 lead after a Royse Tubino attack error and a Bea De Leon set-ending block.

The Flying Titans just cruised from that point onwards as they led by as many as 12, 21-9, in the third set after a Maddie Madayag rejection.

Even the Lady Troopers’ late 10-2 rally to inch within 4, 19-23, fell just short after Tubino practically handed the win over to Choco Mucho with consecutive attack errors.

That late run obviously did not escape head coach Oliver Almadro’s attention as he called on his players to tighten up their endgame play next time.

“In the third set, we relaxed like we’re just waiting for the game to finish, and that’s not right. We have to finish it right. That’s the mindset, but maybe they enjoyed it a bit since our lead was a bit big by the end,” he said.

Tubino and Ging Balse-Pabayo paced Army in the loss with 10 points apiece, while Jovelyn Gonzaga was held to just 6 markers.

Choco Mucho can formally clinch its playoff spot in the biggest way possible with a win against fellow powerhouse and sister team Creamline Cool Smashers at 6 pm on Wednesday, August 4.

Prior to that blockbuster affair, the Lady Troopers will try to keep their heads above water as they face the streaking Chery Tiggo Crossovers at 3 pm. – Rappler.com