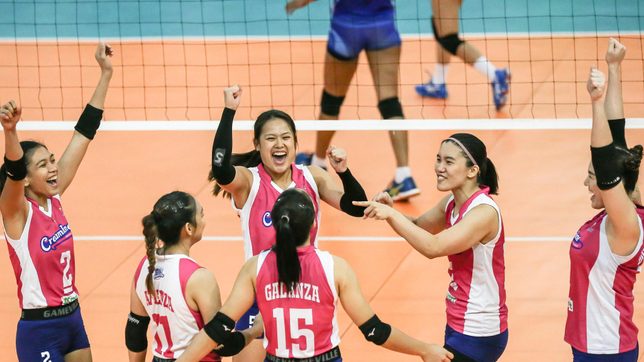 UNBEATEN. Creamline climbs to 5-0 in the PVL Open Conference.

The Creamline Cool Smashers proved yet again in the 2021 Premier Volleyball League Open Conference why they were a cut above the rest after a three-set annihilation of the BaliPure Water Defenders, 25-12, 25-3, 25-15, on Wednesday, July 28.

As confirmed by league stats head Christopher Anore, Creamline’s three-point shutdown of BaliPure was the lowest in league history, eclipsing the 2015 Shakey’s V-League Collegiate Conference record set by the Arellano Lady Chiefs over the University of Batangas, 25-4.

That record was just the cherry on top of the Cool Smashers’ incredible rise to 25 straight wins and 5-0 for the current conference. Meanwhile, the vaporized Water Defenders go back to the drawing board after dropping to a 2-2 slate in devastating fashion.

Michele Gumabao flexed her powerful spiking ability to the tune of 14 points from 12 attacks, a block, and an ace for Player of the Game honors.

Alyssa Valdez also made a strong case to be the game’s best player as she topscored with 16 markers (10 attacks, 4 aces, and 2 blocks) and 9 excellent digs in 10 attempts.

As if things couldn’t get worse for BaliPure after a 12-25 walloping in the opener, things then spiraled out of control as multiple Creamline stars took turns decimating the defenseless Defenders with a 14-0 run, 24-2, before giving up one last block point.

After losing the second set attack point battle, 0-17, BaliPure simply couldn’t muster any more fighting spirit as they went down by as many as 13 points, 20-7, before the game mercifully ended in Creamline’s favor.

Even assistant coach Sherwin Meneses could not believe what his team just did to get the win.

(We didn’t expect this since BaliPure was riding a two-game winning streak, and they’re strong on defense. The team just prepared well for this game.)

Inaugural PVL pro Player of the Week Graze Bombita was limited to just 7 points this time on 6-of-21 attacks, while her running mate Bern Flora mustered just 4 markers.

Creamline looks to finish the week off strong with a blockbuster game against the Chery Tiggo Crossovers led by sisters Dindin Santiago-Manabat and Jaja Santiago at 7 pm on Friday, July 30.

BaliPure will also see action that day at 1 pm and try to get back to its upset-minded ways as it faces another undefeated powerhouse, the Choco Mucho Flying Titans. – Rappler.com