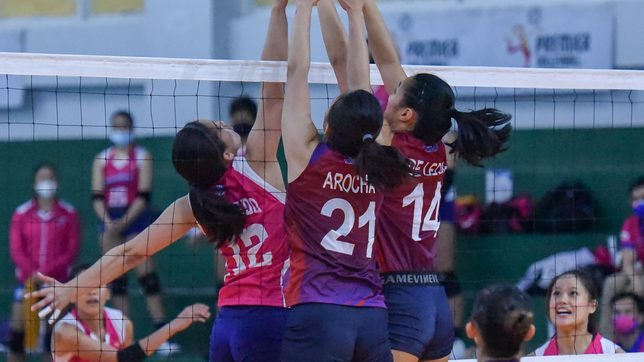 TIGHT. Choco Mucho’s Regine Arocha and Bea de Leon blocks the attempt of Creamline’s Jia Morado to send the ball over the net.

The Creamline Cool Smashers again showed why they are the reigning Premier Volleyball League Open Conference champions as they staged a thrilling five-set comeback win, 18-25, 25-9, 21-25, 25-18, 15-6, over the Choco Mucho Flying Titans on Wednesday, August 4.

At the expense of their sister team’s first loss after six straight wins, the Cool Smashers rallied hard from a bad start to clinch the first semifinal berth with a 7-1 record.

Michele Gumabao backstopped the two-hour grind with 19 markers off 17 spikes, while Tots Carlos provided a much-needed push off the bench with 16 points.

After absorbing a 1-2 set deficit against the Choco Mucho young guns, Creamline shifted into a higher gear in the fourth set, and ran away with a 25-18 win off a massive 15-4 finishing kick powered by Carlos’ late-game spark.

This was all the momentum the defending champs needed as they quickly turned a small 6-3 lead in the final frame to a 15-6 rout off a game-sealing 12-3 blitz capped by a Jia Morado crosscourt hit.

Coinciding with head coach Tai Bundit’s debut, Jeanette Panaga returned from her ankle injury, and finished with 13 points off a game-high 6 blocks while Risa Sato added 12 markers in the all-around team performance.

“We really just have to play for [one another],” Valdez said of the team effort. “All throughout the game, we had struggles and lapses, but I think all the shouting and cheering from the bench really helped the team.”

Kat Tolentino paced the tough loss with 16 points off 14 attacks while Maddie Madayag churned out 12 markers, also with a game-high 6 blocks.

Creamline will wrap up yet another successful elimination round with a Friday, August 6, 1 pm game against the also-ran Perlas Spikers.

Meanwhile, Choco Mucho’s late troubles with contenders have just begun, as they will next face the Petro Gazz Angels and the Chery Tiggo Crossovers in consecutive days on Friday and Saturday, August 6 and 7.

If the Flying Titans then clinch the playoffs, their games will continue on without breaks for at least two more days as the best-of-three semis will start immediately on Sunday, August 8. – Rappler.com