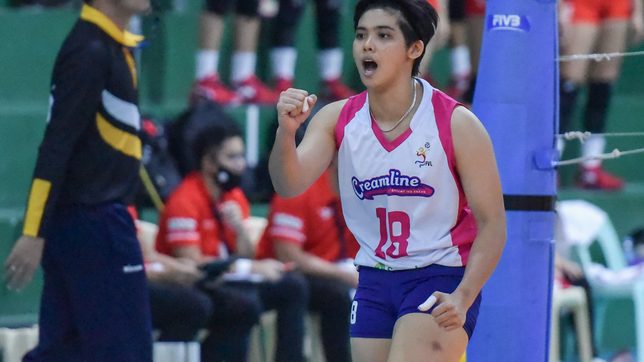 For the fifth straight conference, the Creamline Cool Smashers are back in the Premier Volleyball League (PVL) finals after a rousing three-set rout, 27-25, 25-22, 25-16, of their rival Petro Gazz Angels in Game 2 of the Open Conference semifinals on Monday, August 9.

The defending conference champions get a rare day off, and now await the winner of the do-or-die Game 3 match between the Chery Tiggo Crossovers, and the Choco Mucho Flying Titans on Tuesday, August 10, 3 pm.

In just three sets, super scorer Tots Carlos squeezed in a game-high 21 points off 18 attacks, 2 aces, and a block.

Building off momentum from a pair of nail-biting set wins for the huge 2-0 lead, the Cool Smashers wasted little time in wrapping things up, as they powered ahead to an 18-10 gap off a massive 12-3 run capped by a Carlos hit off the block.

In their last stand, Petro Gazz only managed to get within seven, 14-21, before back-to-back Risa Sato points pushed the lead further away to 23-14, leading to a finals-clinching Carlos hit at the very end.

While Carlos dropped another stellar 20-plus point individual performance, team captain Alyssa Valdez made sure to give credit to everyone involved in clinching their first professional finals berth.

“It’s a total team effort for the Cool Smashers even outside the court,” she said after tallying just 9 points in the win that notably featured almost no playing time from star hitter Michele Gumabao.

“Whether from the second stringers or the coaches, all their reminders are on point so we were able to translate it on the court.”

No Petro Gazz player scored in double-figures as Ria Meneses and Ces Molina paced the loss with 9 and 8 points, respectively.

Myla Pablo, who topscored last game with 26 markers, practically disappeared in this do-or-die game with just 3 points despite starting all three sets.

The Angels will return for the battle of third series on Wednesday, August 11, to face the loser of the Chery Tiggo-Choco Mucho semis tilt. – Rappler.com