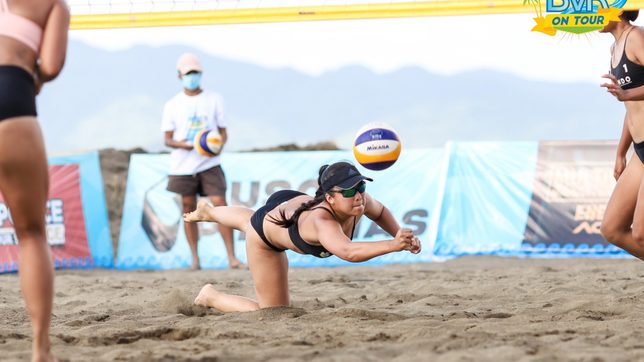 Rondina and Pons hammered out a 21-9, 21-11 victory over Sta. Lucia 1’s Jackie Estoquia and DM Demontaño, right after opening their Pool A campaign with a 21-14, 21-13 conquest of Biogenic’s Roma Joy Doromal and Heather Guino-o.

The Viray twins emerged victorious in their Pool B opener, needing 42 minutes to carve out a 21-16, 16-21, 15-9 triumph over Black Mamba Army 1’s Nene Bautista and Jeannie delos Reyes.

Bautista and Delos Reyes rebounded with a 21-19, 21-16 conquest of Toyota Tuguegarao’s Nicole Tiamzon and Jho Maraguinot for a 1-1 card.

Pineda and Troncoso came through with a 21-17, 21-12 triumph over Eastern Perlas Spikers’ Mich Morente and Jules Samonte to enter the win column. Morente and Samonte, who pulled off a 23-21, 21-19 squeaker over Tiamzon and Maraguinot, fell to 1-1.

Estoquia and Demontaño, who scored a 21-18, 21-7 romp of Delimondo’s MJ Ebro and Bianca Lizares to open their Pool A stint, now hold a 1-1 record.

In a rematch of men’s semis, Creamline 1’s Krung Arbasto and Jude Garcia reasserted their mastery of EVI Construction’s Doy Barrica and KR Guzman, 21-12, 21-14, to open their quest for a second consecutive championship in style in Pool B.

The games are streamed live on the Puso Pilipinas and Smart Sports Facebook pages and YouTube channels.  The streaming is global so BVR fans from other countries can watch as well.