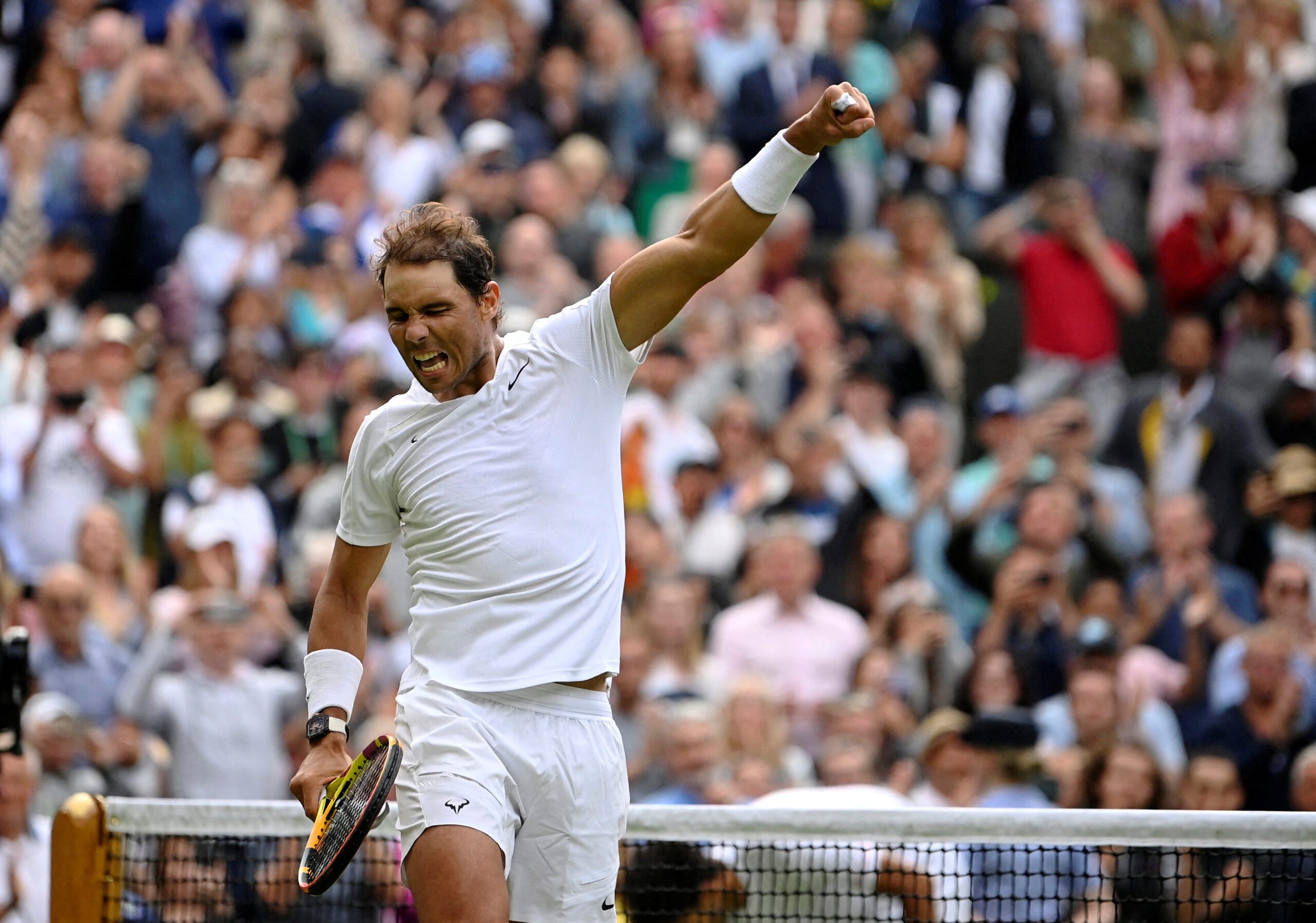 Facebook Twitter Copy URL
Copied
‘At the most critical moment, I think I raised my level. That's a very positive thing,’ says Rafael Nadal after a challenging first round

LONDON, England – Rafael Nadal made a stuttering but rousing return to the grass on Tuesday, June 28, beating 41st-ranked Argentine Francisco Cerundolo, 6-4, 6-3, 3-6, 6-4 in Wimbledon’s first round to begin his campaign for a third Grand Slam title of the year.

The 36-year-old second seed, who has not played at Wimbledon since 2019 and stayed away from warm-up tournaments with a chronic foot problem, looked to be motoring through the match until a series of unforced errors allowed Cerundolo back in.

“It is not a surface that we play very often, especially in my case, in the last three years I didn’t put any foot on the grass,” Nadal told the Centre Court crowd.

“Every day is a test and I am at the beginning of the tournament and the difficult circumstances (under which) I arrived here.”

Nadal won the first set after uncharacteristically coming into the net and forcing Cerundolo to hit a forehand wide. A little skip and a fist pump and the Spaniard was on his way.

He won the second set after breaking serve in the sixth game and serving out to love.

But the 23-year-old Cerundolo, who broke into the top 100 only in February, upped the tempo in the third set and found the lines with his booming forehand to put the twice Wimbledon champion on the back foot.

Nadal, who has also won 20 other Grand Slam titles, looked tired in the face of the onslaught, losing the set under pressure with a backhand into the net. He then dropped his serve in the fourth as Cerundolo’s confidence and energy increased.

“I was more or less under control with two sets and one break up. But then the sun was crazy there,” Nadal said.

“For a righty probably it is not a problem, but for a lefty where the sun is … I was losing the ball completely.”

But Nadal, who won the Australian Open in January and the French Open earlier this month, is nothing if not a fighter. He regrouped and used all his experience to battle back.

Cheered on by a packed Centre Court he broke the serve of his now nervousopponent twice to seal the match and set up a second-round tie with Ricardas Berankis of Lithuania.

“I think I need to keep improving things,” said Nadal. “But at the end of the match I improved. At the most critical moment, I think I raised my level. That’s a very positive thing.”

Seasoned warrior Nadal has a men’s record 22 Grand Slam triumphs to his name, two more than top seed Novak Djokovic and Roger Federer, who is missing Wimbledon for the first time since 1999 because of a knee injury.

Few would bet against a Nadal-Djokovic showpiece match as the seedings suggest.

“Three years without being here … it is amazing to be back and I can’t thank (people) enough for the support,” said Nadal. – Rappler.com