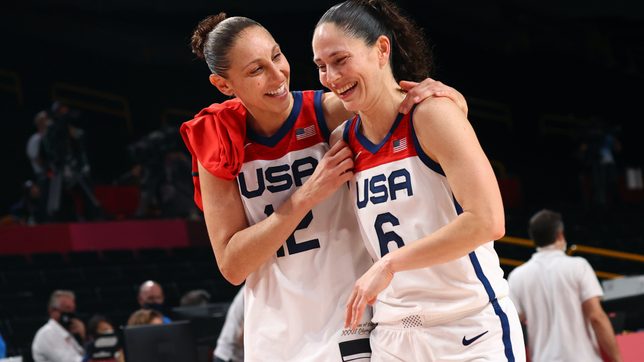 Brittney Griner scored 30 points on 14-of-18 shooting and the United States women’s basketball team won its seventh consecutive Olympic gold medal with a 90-75 victory over Japan on Sunday, August 8, in Tokyo.

“It’s 20 years of sacrifice and putting everything aside and just wanting to win. It’s never easy playing on this team, the pressure, but this group found a way to win,” Diana Taurasi said.

“This one, it’s seven in a row. It’s just not about us,” Bird said. “It’s about all the players that either set the stage or are on it right now.”

The Americans shot 53.6% from the field in the gold-medal game, including 4-of-13 from three-point range. USA blocked 12 shots while Japan had none. Griner had 3 rejections.

The United States were up by 9 early in the third quarter before delivering the knockout punch with a 21-6 burst.

Wilson scored back-to-back baskets as the United States opened up a 58-43 lead with 7:28 left in the quarter.

Bird’s three-pointer and Wilson’s basket pushed the advantage to 68-47 with 3:30 left. Just 81 seconds later, Stewart canned a three-pointer to cap the burst and make it 73-49 with 2:09 remaining.

The United States led 75-56 entering the final stanza before Griner and Wilson opened the period with baskets.

A short time later, Stewart converted a three-point play and Griner added a basket as the advantage reached a game-high 25 points at 84-59 with 5:52 remaining.

The Americans held an early 18-5 lead before settling for a 23-14 lead after one quarter. Japan was within 38-32 after a three-pointer by Naho Miyoshi with 4:05 left in the half before the Americans rattled off the next 8 points en route to the 11-point lead at the break. – Rappler.com