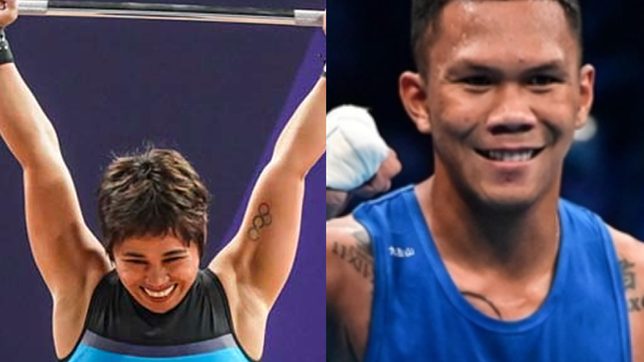 Facebook Twitter Copy URL
Copied
Elite athletes Hidilyn Diaz and Eumir Marcial serve as torchbearers for Zamboanga City, which longs to be in the national consciousness for more than just curachas

Ali Anudin became a fan of Hidilyn Diaz after the weightlifter won in the 2016 Rio Olympics. When the Philippines hosted the 2019 Southeast Asian Games, Anudin made sure to go to the Rizal Memorial Coliseum.

He saw Diaz there and did not let the opportunity pass. “I did not just get the chance of meeting her but I also had a photo taken with one of our hometown heroines. I was starstruck”, he exclaimed.

Hometown for both Diaz and Anudin is Zamboanga, a city in the southern portion of the country that has not been getting favorable press because of its perceived unstable peace and order situation.

Anudin considers Diaz and Eumir Marcial, another Zamboangueño, as risk-takers who left the comforts of home to pursue excellence. It is a lesson he wishes to impart to his students.

“I want to tell them that… no matter where you go in life, the principle holds true that in order to attain great success, one must take risks,” said Anudin, who holds a doctorate in applied linguistics and an instructor at the Philippine Normal University.

Diaz and Marcial have served as torchbearers for a city that longs to be in the national consciousness for more than just curachas and the esoteric language Chavacano, a Spanish-based creole unique to the place.

Named the 2016 Athlete of the Year by the Philippine Sportswriters Association, Diaz is from Mampang, a barangay in the outskirts of the city. The fifth in a family of six to parents Eduardo and Emelita Diaz, she grew up carrying heavy containers of water from the village to their home.

Marcial worked as a jeepney konduktor to augment the family income. Born in 1995 to Eulalio and Carmelita, he learned from his father, a boxing coach, the rudiments of the sport. Marcial grew up in barangay Lunzuran and began joining local competitions at the age of seven.

That Diaz and Marcial are cut from the same cloth, both coming from underprivileged background, make their stories resonate even more with their provincemates.

“Hidilyn and Eumir are living proof of the determination that Zamboangueños are known for,” says Donny Jay Flores, a local entrepreneur. “Seeing these two work their way out of poverty makes me believe they can win gold in the Olympics. They also give me confidence in myself that no matter the circumstances, so long as I continue to work hard, good things lie ahead of me.”

The local government of Zamboanga has thrown its support behind their two prized athletes from the onset of their careers. Not only is Diaz an Olympic medalist, she is also an Asian Games and SEA Games gold medalist.

Marcial, on the other hand, won a silver in the AIBA World Boxing Championships in 2019 and emerged champion of the SEA Games and the Asia and Oceania Boxing Olympic qualifiers. For their achievements, the local government unit rewarded them with financial incentives through City Ordinance 231.

Zamboanga City Mayor Beng Climaco calls both Diaz and Marcial maga modelo de inspiracion or models of inspiration who use their ability and gifts to overcome the odds.

“Their stories of phenomenal success in the field of sports is something the youth seeks to emulate,” she said. “Residents, young and old alike, are interested in being part of the local sports program of Zamboanga with the hope of becoming great athletes like Eumir and Hidilyn.”

And that is why the entire citizenry rallies behind Diaz and Marcial. Not only do Zamboangueños see the two as sources of pride, but they also spark hopes of revival for a city that like many across the country has found itself reeling from the pandemic.

For Maricor Chio, a civilian nurse at the Edwin Andrews Air Base Hospital of the Philippine Air Force, a successful Olympic campaign would be the perfect morale boost that the population so desperately needs.

“The onslaught of the pandemic has resulted in a portion of the populace becoming demoralized and defeated,” she said.

“Diaz and Marcial winning the Olympic gold would bring that pride and happiness back not only for us Zamboangueños but also the whole country,” she added. “It is my prayer that their fighting spirit rubs off on us frontliners.”

An Olympic triumph by either or both Diaz and Marcial, some hope, would also make Zamboanga be viewed by outsiders as a destination brimming with potential and opportunities.

“It will be an honor and privilege for the city,” said Climaco. “People from all over the world will be curious and interested not only to visit but to invest in Zamboanga.”

This is a supposition that Gian Paolo Enriquez, a lawyer and local talk show host, agrees with.

“Should Diaz and Marcial win in the Olympics, I think it will open for the Zamboangeño youth gateways of support in the field of sports not only from the LGU but from other institutions,” he said. “Hopefully, the support will extend beyond sports because our youth has so much potential in arts and sciences, too.”

Enriquez also sees in Diaz a role model that young girls can take a cue from.

“As a father of four daughters, I can relate Hidilyn’s passion to my children. If they are passionate about a certain talent or a skill, no one and nothing should stand in their way towards achieving their goals,” Enriquez said.

“Their gender is not a hindrance to anything they want to be. They only need to have the proper values in life such as respect, discipline and sportsmanship.”

When the Tokyo Olympic Games kicks off, the entire city will be glued to their television as they follow the exploits of their athletic stars. With every snatch and clean and jerk of Diaz, Zamboangeños will be willing her through cheers and prayers to outlift the competition.

Zamboangeños will be feeling the sting of every punch Marcial fails to evade, but they will roar with every jab and hook he connects.

Diaz and Marcial represent the entire country. But for the people of Zamboanga, the two also carry with them the dreams and aspirations of their city.

“Hidilyn and Eumir are blue-blooded daughter and son of Zamboanga,” said Climaco. “They form part of our history and are thus, treasures of the city. Their names are synonymous to Zamboanga City.” – Rappler.com