Aug 19, 2015 11:19 AM PHT
Victor Barreiro Jr.
Facebook Twitter Copy URL
Copied
The company behind the website calls the breach and release of data 'an act of criminality' 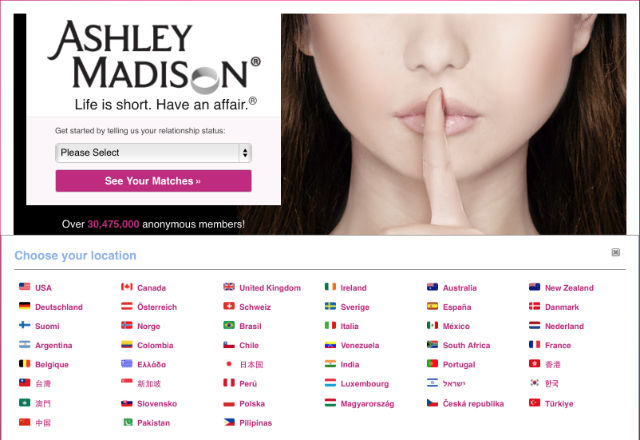 The hackers made “a data dump, 9.7 gigabytes in size” using an Onion dark web address accessible through the Tor browser.

The files appear to show account details – including names, addresses, and phone numbers – and log-ins, as well as payment transaction information dating back to 2007.

Wired added: “A sampling of the data indicates that users likely provided random numbers and addresses, but files containing credit card transactions will yield real names and addresses, unless members of the site used anonymous pre-paid cards. One analysis of email addresses found in the data dump also shows that some 15,000 are .mil. or .gov addresses.”

The Ashley Madison website claimed around 40 million users at the time of the July security breach.

While passwords released in the data dump were encrypted, hackers may still be able to break through the encryption and retrieve private messages sent through specific accounts.

An act of criminality

Avid Life Media, the company behind the Ashley Madison website, called the breach and release of data “an act of criminality.”

“This event is not an act of hacktivism; it is an act of criminality. It is an illegal action against the individual members of AshleyMadison.com, as well as any freethinking people who choose to engage in fully lawful online activities,” Avid Life Media said in a statement.

It added: “The criminal, or criminals, involved in this act have appointed themselves as the moral judge, juror, and executioner, seeing fit to impose a personal notion of virtue on all of society. We will not sit idly by and allow these thieves to force their personal ideology on citizens around the world.” – Rappler.com