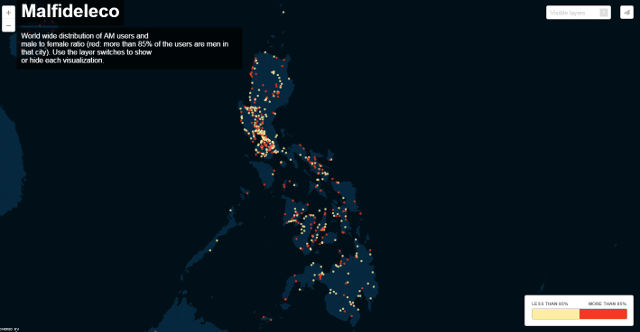 MANILA, Philippines – Reports following the initial release of stolen data from Ashley Madison showed that approximately 90% to 95% of the adultery website’s users are male.

A new visualization based on these data also point to cities in the Philippines as among areas that have a hight count of male clients of the adultery website.

The visualization also shows a map of user distribution.

In the United States, for example, a lot of the users appear to be in the east coast, while the general region around Metro Manila is visible on the Philippines’ side. Comparatively, most of Russia and Africa does not light up at all.

The map, while not presenting anything definitively conclusive about the users, does breed discussion and caution among those who use such sites. More importantly, it appears that Ashley Madison users may have set themselves up to fail, seeing as the pool of people using the site is predominantly male for most parts of the world that use the site, the Philippines included.

According to Bustle, the hackers released the Ashley Madison information after being upset with the site and its parent company Avid Life Media for creating fake female profiles to lure men to join Ashley Madison.