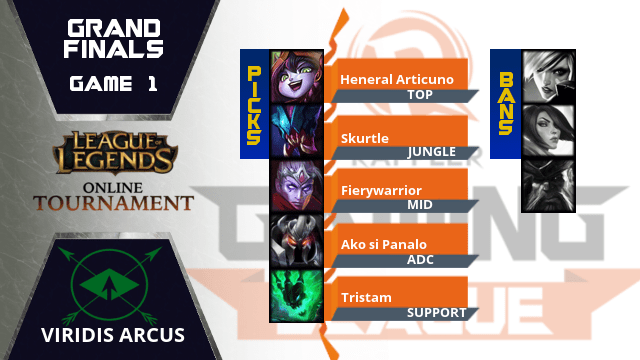 Relentless, the Azure Eagles have AZE.Tenno pick his late-game carry Jinx. The rest of the team fills-in for the early game space needed for the carry. They pin down VA.Skurtle’s roams by limiting his jungle pool.

Viridis Arcus, on the other hand, invests on top lane bans, and lines up colossi champions to boot. VA.Skurtle has his Rek’sai to exert enough pressure in all lanes to set-up the dragon for the team.

The Azure Eagles were caught unprepared against VA.Ako si Panalo’s Mordekaiser pick. With VA.Tristam-Thresh’s hooks being on-point, the archers easily shut down their rival’s bot lane duo in the early game. Skillshots upon skillshots set the match for Viridis Arcus. There isn’t enough damage coming in from the Azure Eagles to turn the match. Game one ended in less than 30 minutes. Viridis Arcus goes for a more traditional composition in game 2. VA.Fierywarrior unbenches his Azir, teaming up with a Jinx and Braum duo lane. Great sets, pokes and peels are in their arsenal.

The Azure Eagles ban bot-lane aggression from Game 1. With Jinx taken out of AZE.Tenno’s pool, he goes for a champion with better mobility. The rest of the picks fill in for the lack of power in the early game.

AZE.Celestial Mikoz-Morgana’s wrath dominates the early minutes. In his more comfortable aggressive play-maker role, he was able to give his team the First Blood. His roams left AZE.Tenno-Tristana, however, quite under-farmed. AZE.King of Motus-Le Blanc is pinned in his efforts to delete the Viridis Arcus carries. A fed VA.Fierywarrior-Azir takes command of his team’s engages together with VA.Ako si Panalo-Jinx. The protection VA.Tristam-Braum and VA.Skurtle-Rek’sai’s rotation pays off as they take Game 2. For their last stand, the eagles save themselves from VA.Skurtle’s Rek’sai. The bot-lane still runs a late game carry. AZE.King of Motus goes from carry to utility while the rest of the picks go for rowdier peelers.

Viridis Arcus still bans the top laners of Azure Eagles. High utilities come in from all champion picks. VA.Skurtle picks his personal favorite Tahm Kench with less of an early game presence, but all lanes have solid skillsets to get out of trouble by themselves.

In this win-or-nothing game 3 for the Azure Eagles, the team goes for an invade and secures the First Blood against VA.Ako Si Panalo-Sivir.

Daring and clutch trades riddle through the minutes with almost synchronized teleports from the top laners of both teams.  The upset came when Viridis Arcus goes a bit off focus in one clash with VA.Fierywarrior-Viegar being a bit too late to aid his team mates. The Azure Eagles catches Viridis Arcus off-guard riding on AZE.Zen is such a qt-Evelynn’s engages and counter-engages. Hope is not lost as the Ateneans stomp their rivals supposed series sweep. Viridis Arcus gives out a respect ban against Zen is such a qt’s Evelynn while retaining their top-centric bans. Archer carries lock in their mains.

The Azure Eagles go steady, running the same composition as their game turning bout. AZE.Celestial Mikoz ups the protection with his Janna pick while AZE.Zen is such a qt returns his carry Nocturne into the series.

It’s a slow paced game 4. The eagles out-rotate and out-respond the archers for the majority of the game with superior picks in the lanes, and good damage shuffles during clashes. AZE.Tenno-Kog’maw becomes an unstoppable juggermaw come late. VA.Fierywarrior-Azir falters to delete the Azure Eagle carry with two supports protecting him all the way to Ateneo’s victory. The Viridis Arcus ban Lulu for Game 5 to remove her trade-turning utilities. Viridis Arcus knowing that their strength is in synchronized sets, locks in their best to follow-up each other’s skillsets.

The Azure Eagles, on the other hand, go slow and steady with their usual line-up. Giant peelers flank for the late game carry while the mages set and shield.

A rare lane switch was pulled by Viridis Arcus against their rivals in this game ending match. Pushing AZE.foopie-Hecarim out of his top lane, the archers get the first tower. Azure Eagles answer them by taking the dragon.

Junglers of both teams seems to be taking turns to display their playmaking abilities. But with better protection and flanks from Ateneo’s picks, De La Salle scrambles to focus their plays, deliver blows and exert pressure. Thanks to AZE.foopie-Hecarim’s sacrifice, the eagles pinsir their rivals. AZE.Tenno-Kog’maw wasn’t able to get his Penta, but the team secures the championship. – Rappler.com