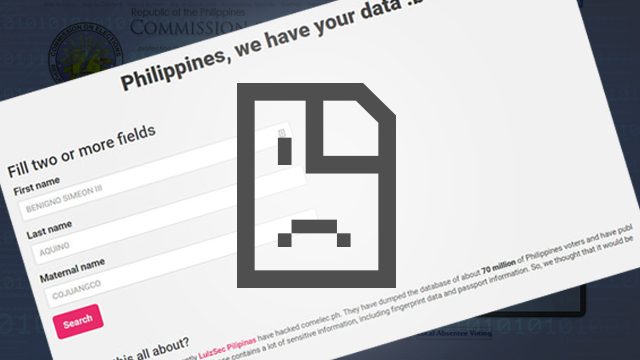 Facebook Twitter Copy URL
Copied
While the site does appear to be down, Filipinos' data from the Comelec data breach is likely still circulating online

MANILA, Philippines – A searchable website that let users look for information leaked in a Comelec data breach has reportedly been taken down, according to Commission on Elections (Comelec) spokesperson James Jimenez.

Jimenez announced the news via Twitter on Friday, April 22.

The site data itself, however, remains preserved by CloudFlare and GoDaddy.

Jimenez added that the DOJ is currently in the process of requesting for the preserved data on Cloudflare and GoDaddy, going through official channels by coordinating with the National Bureau of Investigation.

DOJ currently in the process of requesting for the preserved data on Cloudflare and GoDaddy, thru official channels, coordinating with NBI

Meanwhile, the recently constituted National Privacy Commission – a member of the Philippines’ Cybersecurity Inter-Agency Committee –  has written the Comelec regarding the reported breach, requesting for a formal report.

While the searchable site does appear to be down, Filipinos are still at risk, as the data is already online for other people to rifle through. (READ: After Comelec data leak, what to do to protect yourself?)

At this point, being vigilant about your data, who you share information with, and about what you share and whom you interact with online may help  mitigate the damage caused by the Comelec data leak. – Rappler.com