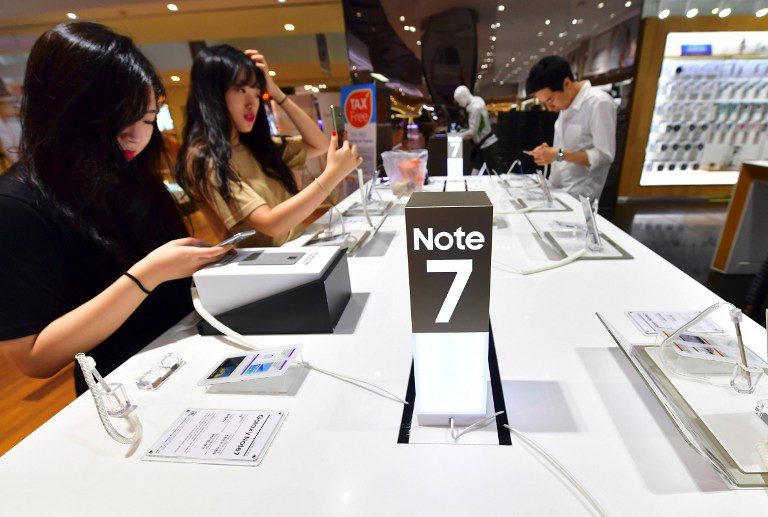 Facebook Twitter Copy URL
Copied
'Consumers should immediately stop using and power down all Galaxy Note7 devices, including Note7 devices received as replacements in the previous recall,' the agency says in a statement

WASHINGTON, DC, USA – An expanded US recall was ordered Thursday, October 13, for Samsung Galaxy Note7 smartphones, including replacements for the devices plagued by exploding batteries.

The Consumer Product Safety Commission announcement, formalizing the action announced by the South Korean giant, said the recall affects 1.9 million handsets, including the one million announced in a September 15 recall.

“Consumers should immediately stop using and power down all Galaxy Note7 devices, including Note7 devices received as replacements in the previous recall,” the agency said in a statement.

Samsung announced earlier this week it would recall all the Note 7 handsets worldwide, including replacements, and halt production of the flagship device in a massive blow to the world’s biggest smartphone maker.

The company recalled some 2.5 million Note7 units in 10 markets following complaints that its lithium-ion battery exploded while charging, and then had to expand that as reports emerged of replacement phones also catching fire

The company said in a separate statement from its US headquarters Thursday it would offer a $100 credit to customers who want to exchange the Note7 for a different Samsung device. (READ: Phoenix Semiconductor unfazed by Samsung Galaxy Note7 global recall)

“We appreciate the patience of our consumers, carrier and retail partners for carrying the burden during these challenging times,” said Tim Baxter, president and chief operating officer, Samsung Electronics America.

“We are committed to doing everything we can to make this right.”

Samsung said it was working with the CPSC, carriers and retailers to get customers to return the affected handsets. – Rappler.com