Microsoft’s Surface Studio PC is for the creator in everyone

Oct 27, 2016 12:34 AM PHT
Victor Barreiro Jr.
Facebook Twitter Copy URL
Copied
The Surface Studio is what Microsoft is touting as a computer for creators of all types 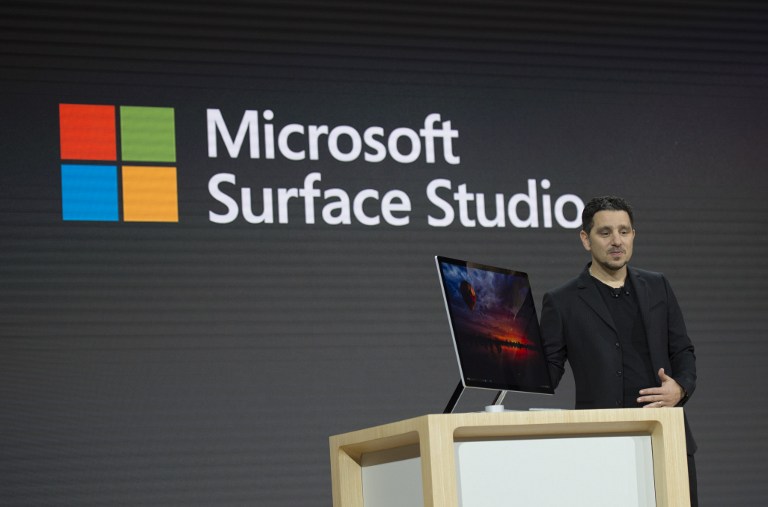 MANILA, Philippines – Microsoft showed off a new bit of tech called the Surface Studio for the enterprise consumer looking to take their creativity to new heights.

The Surface Studio is what Microsoft is touting as a computer for creators of all types.

It sports the “world’s thinnest LCD monitor ever built” at 112.5mm, and the touchscreen display is encased in an aluminum enclosure that’s 28 inches across. The display outputs at 13.5 million pixels, according to Microsoft Corporate VP of Devices, Panos Panay, which is approximately 63% more than a standard 4K television.

The Suface Studio’s display, noted The Verge, supports expanded color output, which is critical for photographers, videographers, as well as designers. The base’s connectivity options include audio, SD card, Mini DisplayPort, ethernet, and 4 USB 3.0 ports. A built in microphone array is also included so you can easily chat or activate the Cortana assistant on the device.

Aside from the Surface Pen, a new accessory called the Surface Dial can be used in conjunction with the Studio, as a control device on or off the screen, which can allow the computer to access and interact with various options, such as a color palette, volume control, or screen brightness.

Microsoft’s showcasing of the device was the end highlight of their Windows Event, which also introduced a new Surface Book and the Windows 10 Creators Update.

The Surface Studio will be available in in limited quantities for the holidays and will cost $2,999. – Rappler.com

Check out our coupons for the latest deals on tech.