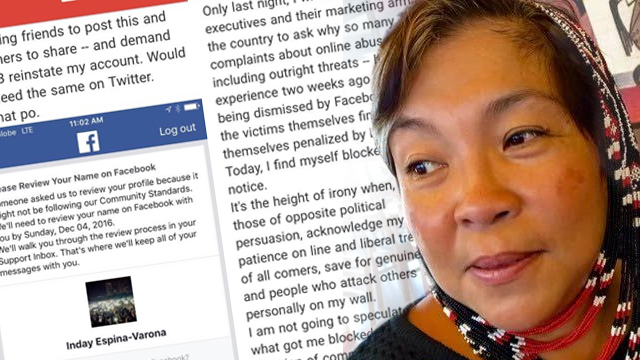 MANILA, Philippines (UPDATED) – Writer and activist Inday Espina-Varona was blocked on Facebook on Monday, Nov 28, after reaching out to the social network to raise some issues about online abuse.

Without her Facebook account, Varona turned to Twitter where she disclosed that she had reached out to Facebook executives the night prior. Her message: Why were complaints of cyber-bullying and online abuse being dismissed by Facebook while the victims of these get blocked?

Ironically, that very message led to Varona’s account being blocked.

A copy of that message was posted by blogger Noemi Lardizabal-Dado, embedded below.

On Varona’s Twitter page, friends and followers have come to her support, outraged over the fact that the calm and rational media professional was blocked while loud, senseless trolls remained rampant on the platform.

Varona insisted she did not violate any of Facebook’s community standards, which include censorship against hate speech, violence and graphic content, nudity, bullying, and direct threats to name a few.

Commenters say the blocking of Varona’s account, a verified one, may have been the result of a concerted effort involving enough reports to trigger Facebook’s blocking algorithm.

Facebook’s system can be gamed to block out a user whose posts may be in opposition to a certain group’s interest. (Read: Fake accounts, manufactured reality on social media)

However, as Rappler has reported before, Facebook has said that the number of reports on a particular post does not affect whether something will be removed and that it doesn’t remove content simply because it has been reported a number of times.

According to NPR.org, this task is now outsourced to call centers in the Philippines, raising concerns that the human reviewers may have their own political agendas.

But as the article points out, the team has to deal with a kind of load that cannot have team members reviewing every flagged post thoroughly enough. Some are simple enough to categorize and censor but others require nuanced analysis and thorough contextual review. Given the time constraints, that sort of nuanced analysis doesn’t always happen.

We are reaching out to Facebook and the call center in question for their comment on the matter.

Certain groups can take advantage of the situation and have someone blocked and have their account suspended according to somewhat amorphous standards. Natural human bias is a factor too.

What isn’t amorphous is that prior to the blocking, Varona has been vocal about her opposition to the burial of former president Ferdinand Marcos at the Libingan ng mga Bayani.

The writer, a veteran in the anti-Marcos dictatorship movement, has been active in supporting earlier anti-Marcos protests, which could have made her a target for the pro-Marcos groups. The timing of her Facebook account’s suspension is peculiar, to say the least, as the November 30 protests against Marcos’ burial loom.

Varona herself hints that a troll army is behind the reports, replying to one follower who said that she might have been making a “helluva dent” with her rational posts. “As many people convinced to be rational, the troll armies up the ante,” she replies.

This is not the first time that groups and individuals posting strong political opinions had been blocked on Facebook. Reviewing similar incidents in the past, some have been anti-Duterte in nature.

The same happened to one account petitioning to take down the Facebook page of Duterte supporter Mocha Uson.

But perhaps the most similar to Varona’s situation is that of Ed Lingao’s case back in June. The TV5 anchor’s page was taken down because he criticized Duterte’s support for the burial of Marcos at the heroes’ cemetery, and was slapped with the same reason that Varona is facing now: community standards were violated.

Varona wrote then of the suspension: “Why? Because of an apparent deluge of Marcos troll complaints after a page they are part of shared Ed Lingao’s recent post on the family of the late dictator.” – Rappler.com