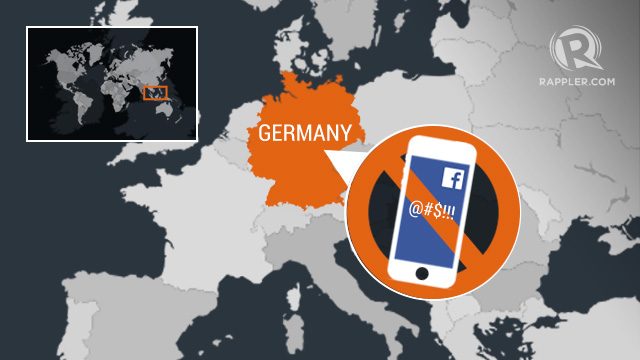 Facebook Twitter Copy URL
Copied
The draft law, which would still require the approval of Chancellor Angela Merkel's cabinet and then the parliament, follows several months in which companies had been allowed to take voluntary measures

BERLIN, Germany – Germany’s justice minister proposed a law on Tuesday, March 14, that could see social networks such as Facebook slapped with heavy fines if they fail to wipe illegal hate speech from their sites.

The minister, Heiko Maas, who has been highly critical of Facebook’s efforts to clamp down on outlawed racist and xenophobic posts and comments, said the new measures could carry penalties against the offending company of up to 50 million euros ($53 million).

He noted the draft law, which would still require the approval of Chancellor Angela Merkel’s cabinet and then the parliament, followed several months in which companies had been allowed to take voluntary measures.

“These have proved insufficient, and they (the posts) are not being deleted quickly enough,” Maas told reporters, citing data provided by internet watchdog jugendschutz.net.

A surge of hate speech on Facebook and other social media in Germany has raised the political heat on the companies ahead of a general election in September.

Facebook and other web giants pledged in 2015 to examine and remove within 24 hours any hateful comments spreading online, in particular over the mass influx of migrants and refugees.

However Maas said Tuesday that “networks aren’t taking the complaints of their own users seriously enough”.

Google’s YouTube video sharing platform fared better, with a rate of 90% according to jugendschutz.net data cited by the minister.

At the latest, offensive posts would have to be taken down within one week after a complaint is submitted.

Companies would also be required to file quarterly reports on their efforts to crack down on hate speech.

Maas’s hard line, among the toughest in the European Union, has its critics within the government.

This month Economy Minister Brigitte Zypries, like Maas a Social Democrat, warned against a sweeping law, saying responsibility for enforcing hate speech legislation should not be “privatized”.

However the Central Council of Jews in Germany welcomed Maas’s proposal, saying stronger measures against “incitement of racial hatred, glorification of National Socialism and Holocaust denial on social media” were “urgently required.” – Rappler.com