Fitted with screens of 5.8 and 6.2 inches, the two handsets include Samsung’s upgraded digital assistant Bixby, competing in a crowded field that includes Apple’s Siri, Google Assistant and Amazon Alexa.

The most striking feature of the new phones is what Samsung dubs an “infinity display” – an expanded glass screen that covers the entire front of the device and appears to curve seamlessly around its edges. The home button has been replaced with a pressure-sensitive section embedded under the screen.

Both phones are water resistant and allow for biometric authentication with fingerprint and iris scanners. 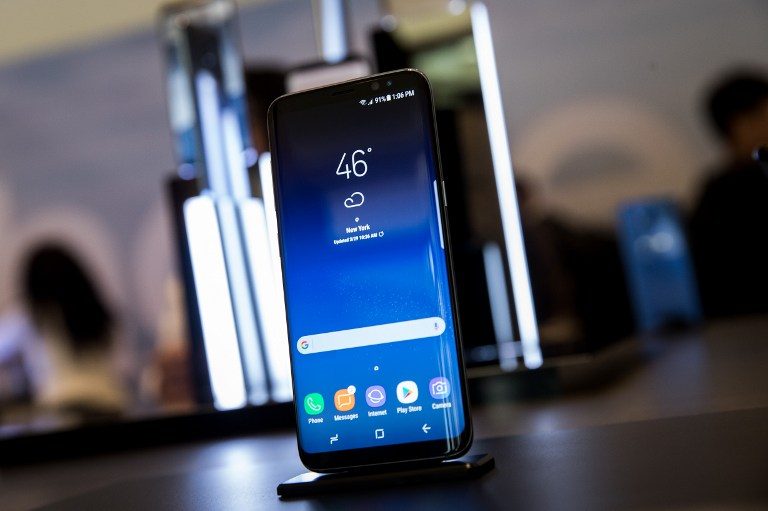 Bixby marks a further step into services for the world’s biggest smartphone vendor, allowing users to shop, search for images and get details about nearby places with image recognition technology.

“We’ve built intelligence into the camera,” he said.

“If you see something you want to buy, just point the camera at it and Bixby will find it from one of our partners.”

The digital assistant will also enhance the phone’s capabilities as a remote control for connected home devices, Thodla said.

The South Korean electronics giant late last year bought Viv, an artificial intelligence startup with co-founders who were part of the team that built virtual assistant Siri, which Apple bought some seven years ago. The new phones will be available starting April 21, Samsung said. In the US market, they will be sold through major carriers and retailers, with unlocked devices priced from $725.

The Galaxy S8 release comes after Samsung was forced to recall its Note 7 phones for catching fire due to overheating batteries.

The debacle cost the South Korean company billions of dollars in lost profit and hammered its global reputation and credibility, during a torrid period that has also seen it embroiled in a corruption scandal.

Its vice-chairman Lee Jae-Yong, heir to the parent Samsung group, has been arrested and indicted for bribery, along with four other senior executives, in connection with a graft scandal that saw ex-president Park Geun-Hye impeached.

Samsung apologized to consumers for the recall and was forced to postpone the S8 launch. Its investigation blamed the problems on faulty batteries.

The firm later embarked on a campaign to restore its battered reputation, placing full-page advertisements in US newspapers that admitted it “fell short” on its promises.

The tech giant says it has also come up with elaborate step-by-step safety verification procedures for future products to prevent similar disasters.

As part of its launch, Samsung will be including its Gear virtual reality (VR) headset to customers pre-ordering the handsets. The VR headset now includes motion controllers, a new way to interface with virtual worlds on a mobile device.

Samsung also introduced its Dex adapter which allows the smartphones to be transformed into desktop computers, and the new Gear 360 which can be used for livestreaming of 360-degree videos on Facebook and other platforms. The Dex will be available in the Philippines for P7,599 at a yet undisclosed date. Jan Dawson of Jackdaw Research was impressed by the new devices but also noted they would be priced higher than competitors from Apple and others.

“The Samsung approach is particularly clever, with its curved screen now less sharp on the edges, offering a more symmetrical and therefore more comfortable device,” he said in a blog post.

“The price of the new phones is up to $100 higher than their predecessors and almost all of the premium smartphones they’ll be competing with, which feels like a big risk.”

Dawson said Samsung is betting “that its phones will justify a higher price, whereas it could have used these new phones as a way to drive higher sales after a couple of years of stagnation.” – Rappler.com/With reports by Gelo Gonzales