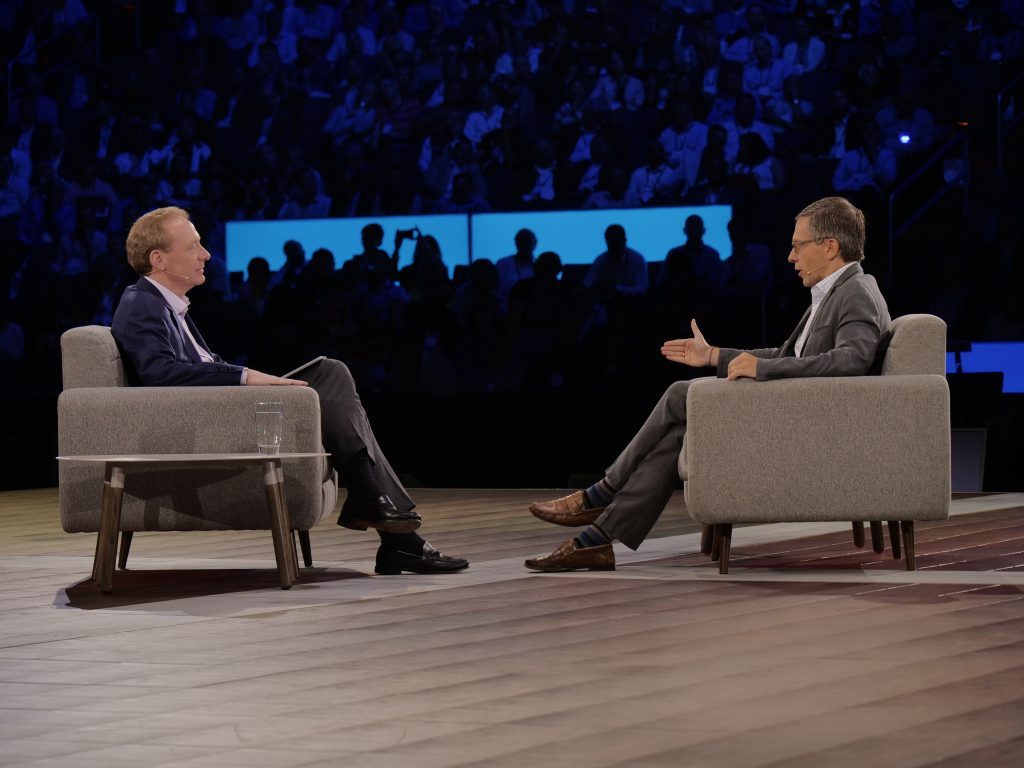 Facebook Twitter Copy URL
Copied
This is one of the many interesting statements of global political expert Ian Bremmer about the technology sector's role today, cybersecurity, the future of labor, and privacy at Microsoft Inspire 2017

One of the most memorable moments from the keynote was when Bremmer said that he thought Mark Zuckerberg wasn’t running for the US presidency.

He’s “running to be virtual emperor,” Bremmer said, recognizing that the Facebook CEO may be aware of the evolving role of tech companies now: a solutions provider for society in cases where the government fails to provide. (WATCH: 12 highlights: Mark Zuckerberg’s Harvard commencement speech)

That’s just one of the many interesting insights that the American political scientist said in the half-hour session, which you can also watch above. We’ve summarized the most interesting tech-related tidbits below:

The world closes the chapter on a US-led global order

In his opening statement, Bremmer thought that from a political standpoint, 2017 is a “little more concerning” than how things have been for Microsoft and for the tech industry in general, which have seen so many “great things happening.”

The biggest thing, he said, is that, while the US will remain a superpower, 2017 is the year that “the world closes the chapter on a US-led global order.”

Some sentiments point to US President Donald Trump as one of the reasons, but it’s not just that, Bremmer said. There are other factors at play: the rise of China, the weakening of the transatlantic relationship, the Brexit referendum, the Middle East imploding and fragmenting, and Russia undermining a US-led order.

Bremmer said the US is no longer prepared to be the “cheerleader for global values.” Disruption, a tech buzzword, is happening in global politics too.

To this, Smith honed in on one of the emergent traits of this disrupted global order: the rise of populism and populist leaders in the world.

Its rise, Bremmer said, is the result of “surprisingly large parts of the population, saying the social construct doesn’t work, saying the establishment political leaders – the CEOs, the bankers, the mainstream media, the public intellectuals – do not represent me.”

Trump was himself “very much outside the tradition of the US political spectrum,” Bremmer described. Populism is likely to expand too, the political expert noted.

Bremmer said that because those in the established political spectrum didn’t appear to have succeeded in attending to the needs of the citizens, the population turned to a figure who appear to be more representative of them and their views on what needs to be done to improve their lives. The Philippines experienced a similar turn of events with President Rodrigo Duterte.

Turning to tech companies for solutions

What does this spread of populism as a function of people looking for solutions mean for the technology sector?

Bremmer said that if the solutions presented by the central government presents don’t work, the people may turn to technology companies for an answer:

“If the central government isn’t getting it done for the people, people are going to look to other organizations to make life work. So for me, I don’t think Mark Zuckerberg is running to be president of the United States by going to all 50 states. I think he’s running to be virtual emperor – in the sense that he understands that people are spending an extraordinary amount of time with his parameters, and he wants to provide for them solutions.

And I think, that looking at technology companies around the world, they [have the ability] to say ‘I’m part of your solution, and the government is failing you, I’m going to step up. I’ll step up as a partner for that government or I’ll step up directly. I’ll partner with the local government. I’m servicing you as a consumer.'” Tech companies – with their immense influence on economies and cultures now, plus their inherent nature to create new solutions – indeed have the power and the capability to impact people’s lives more than just a gadget or product vendor.

And often, the breadth of their impact can either be as great or even greater than the national government itself. Their impact can be worldwide: At Inspire alone, Nadella noted that there were 140 countries in attendance, represented by partner businesses and leaders that employ 17 million employees around the world.

Other tech companies making big impact: Facebook, which recently hit 2 billion users, and Samsung, which accounts for around 15% of the entire South Korean economy.

A CNN feature on Samsung has an almost comical excerpt on the company’s impact in Korea:

“South Koreans can be born in a Samsung-owned medical center, grow up learning to read and write with the help of Samsung tablets and go on to attend the Samsung-affiliated Sungkyunkwan University.

It doesn’t end there. They may then live in a Samsung-built apartment complex, fitted out with the company’s appliances and electronics. South Koreans can even end up at a Samsung funeral parlor when they die.”

Microsoft partners presented solutions too in the field of education, health, and environment at Inspire – the most memorable of which was a young Armenian girl whose vision was saved through high-fidelity video streaming. Experts in the US guided surgeons in Armenia in real-time as the surgeons operated on the girl, eventually saving her from blindness.

Given the current political millieu, Bremmer said that people may turn more towards tech companies to solve problems that the government can’t seem to fix. In effect, tech companies now have the added responsibility of meeting people’s expectations of positive impact on society.

Bremmer, in fact, said this directly:

“[Technology companies] are going to have much more responsibility. The stewardship is increasingly not just to the shareholders. It’s not just to the consumers and the products you can provide them. But it’s ‘What are you doing as a big, wealthy organization that is making my life better – as my government doesn’t make it work?'” The tech sector is also “increasingly becoming not a, but the strategic sector,” said Bremmer.

“In a world where the control of big data and of the transmission mechanisms means that ‘I want to be between the consumer and everything they do and experience, and all the ways they spend money’ – that becomes a very strategic place to be,” he said.

He advised, “For a company like Microsoft or anyone in the tech sector, understanding how governments are your partners or your antagonists, and what that means for how you develop yourself becomes as important as your consumer base.”

Automation and the future of jobs

Smith pivoted to the subject of automation and artificial intelligence (AI), and their impact on people’s jobs.

Bremmer warned that the US is not talking about it enough and is not realizing the urgency. Since Trump was inaugurated, he said that the US has been occupied with talking about how much they either love or hate the president – instead of devoting time to the future of AI and work. (READ: DICT: 48% of employees to be affected by automation)

In the last wave of globalization, Bremmer recalled that labor moved from Japan, Europe, and the US to developing nations where labor was cheaper.

In the next wave – automation, the robots and the AI that automate functions and processes, and the big data that effective AI is fueled by – Bremmer said it’s about “labor being disentermediated from capital.”

Simply put, human labor, as we know it now, will lose its economic value. Jobs will be lost.

There will be new jobs eventually, Bremmer said, but first there will be a huge dip – and a “lot of the people” are not going to make it through that dip.

He concluded by mentioning a model country whose direction may very well help it adapt the best to automation: Singapore.

On privacy, Bremmer noted that our definitions of what we want to keep private or public are changing:

“Privacy is eroding simply by virtue of the tools that are available on a daily basis. Overwhelmingly, we’re moving towards: there ain’t no privacy. And I think generationally, younger people around the world are coming to terms with what that means for the way they live their lives. And values and norms and what is and what isn’t acceptable about what we learn about our friends and colleagues is going to change as well.”

On cybersecurity, Bremmer mentioned Iran and North Korea, saying that he was “more worried about the threat they represent from a cyber perspective than…from a conventional nuclear perspective.” (READ: DICT launches PH 5-year nat’l cybersecurity plan)

He cited examples including Iran reverse-engineering viruses; North Korea hacking the Central Bank of Bangladesh, “nearly stealing a billion dollars”; and ISIS “grabbing over a hundred million dollars recently by basically creating false websites for Al-Jazeera and other organizations but with real advertising.”

This means that the “national security installations in these countries are playing catch-up” and that governments will be willing to “squeeze” the private sector in order to make themselves look better or as a scapegoat.

In light of all these disruptions and questions on the future of labor and national security, Bremmer ended the chat with a positive message:

“Americans do not respond well to life as usual. Human beings don’t. We need adversity in order to show us our best. And the thing that makes me most optimistic about the future of our planet is that I know that we will all show our best when we’re pushed, when we’re forced to.

The planet is going to demand a lot more of us over the coming years in this challenging geopolitical environment. And all of us has something to say to the planet, which is that, we are up for it.” – Rappler.com