The 8 has the numbers fitting for a 2017 flagship:

It’s priced at 599 euros (P36,208.35) and will start to come out in September, but specific details on Philippine availability as well as pricing have yet to be announced.

While the specs are on par with what consumers expect out of a 2017 flagship, one feature allows it to stand out: its “Dual-Sight” mode, which allows a user to capture videos using the front and back cameras simultaneously.

The mode produces a split-screen video, where a user will be able to show two scenes at the same time: what’s happening out front, and the user’s face on the other. By concept, the feature removes the need for a user to switch between the front and back cameras when trying to capture their surroundings, say, at a concert, at a vacation, or whatnot. 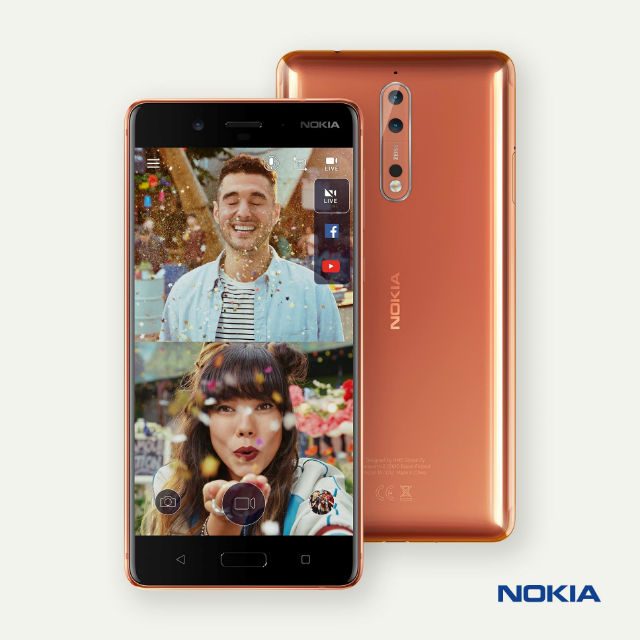 Dual-sight also works with Facebook’s streaming feature, Facebook Live, in which users regularly switch between the front and rear cameras to tell their stories. With dual-sight, users now have the option to forgo switching between cameras.

Regarding the phone’s strong focus on live content, HMD chief product officer Juho Sarvikas, in a press statement, said: “We know that fans are creating and sharing live content more than ever before, with millions of photos and videos shared every minute on social media. People are inspired by the content they consume and are looking for new ways to create their own.”

“It’s these people who have inspired us to craft a flagship smartphone which perfectly balances premium design, an outstanding experience and powerful performance,” he finished.

The Nokia 8 has a 13MP dual-camera system with two sensors, color and monochrome, on the rear. Up front, it has a wide-angle, auto-focusing 13MP shooter. Both front and rear cameras use Zeiss lenses, a continuation of Nokia’s long-standing partnership with the respected German optics maker.

The 8 also has 4K video recording, and features an “Audio Focus” mode powered by a spatial 360-degree audio technology called OZO. The mode lets users focus on a specific audio range, and tune out ambient and background sounds when recording. – Rappler.com