These are the Facebook ads Russia bought to misinform US voters Facebook Twitter Copy URL
Copied
'We basically have the brightest minds of our tech community here and Russia was able to weaponize your platforms to divide us, to dupe us and to discredit democracy,' says one US representative

MANILA, Philippines – US lawmakers on Wednesday, November 1, released to the public some of the Facebook ads alleged to have been propagated by Russian agents. The ads were run on the social network to sow discord and divisiveness among the US voting public, and ran before the US presidential elections in 2016.

The ads were released online by the House Intelligence Committee during an ongoing hearing involving US tech giants Facebook, Google, and Twitter. In the hearing, the 3 tech giants revealed the extent of the disinformation campaign, alleged to have been run, in a major part, by Russia’s Internet Research Agency – or “troll armies” as the companies and lawmakers put it.

These armies reached 126 million users on Facebook and another 20 million on Facebook-owned Instagram, and generated 288 million responses and reactions on Twitter. Google didn’t cite a specific number but confessed to have found evidence that their platforms had been misused as well.

To these findings, California Representative and member of the House Intelligence Committee, Jackie Speier, was quoted by The New York Times as saying: “We basically have the brightest minds of our tech community here and Russia was able to weaponize your platforms to divide us, to dupe us and to discredit democracy.”

Just what kinds of ads did the Russian agents allegedly run? Content that are controversial, inciting tribalistic reactions to issues on immigration, race, police brutality, religion and LGBT.

The house committee’s revelations, available on the committee’s website (HPSCI Minority Exhibit A and HPSCI Minority Open Hearing Exhibits) provide insight as to how such extra-national agents shape their content with the goal of influencing opinion. Take a look at some of these Facebook and Instagram posts below.

Some are meant to trigger a reaction to immigration and foreign influences, particularly Muslim individuals: 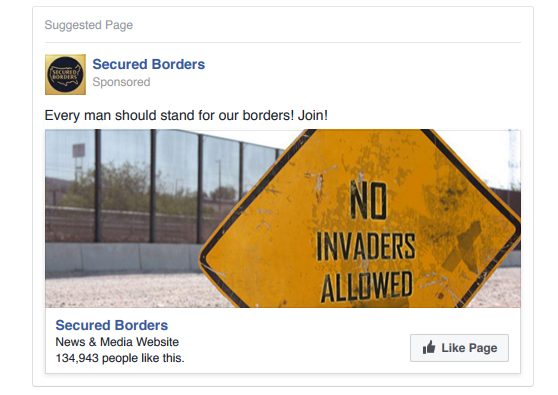 A few ads directly encouraged people to stop voting for a candidate. Both Donald Trump or Hillary Clinton had ads targeting them: One ad stirred the pot for US soldiers, essentially saying that Hillary Clinton doesn’t understand or care about them: Hillary was also blamed for a policy concerning the treatment of illegal aliens from Mexico: One post promoted the secession of Texas from the US if the “corrupt media” keeps protecting “Killary Clinton”: Even religion was used to stir the pot: Issues on gun ownership and political stances on the LGBT community were also used as subjects to further the divide among citizens: While there were both pro-Trump and pro-Clinton ads run by foreign agents, the mere fact that entities outside of the country were able to easily use online platforms for their goals has been deeply troubling for the US.

Lawmakers have put the onus on the platform-owners to take more significant action regarding these to avoid such instances in the future whether in the US or other countries. – Rappler.com