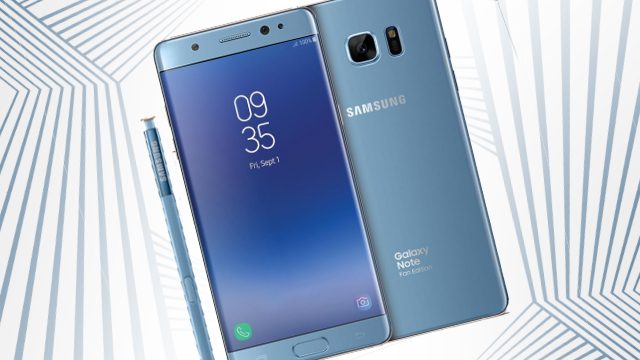 MANILA, Philippines – Samsung announced the formal availability of the Samsung Galaxy Note Fan Edition (FE) in the Philippines last Saturday, November 4 – made with unused Note 7 components and minus the 3,500 mAh battery.

Last year, the much-awaited Note 7 turned into a disaster as units exploded, the cause of which was later found out to be faulty batteries.

The units were recalled, the biggest of its kind ever. Samsung, however, was able to redeem itself by owning up to its mistakes and implementing changes to the device’s quality assurance procedures.

Their next flagship after the Note 7, the Samsung Galaxy S8, also proved to be a critical success, helping the brand further patch things up with consumers.

After the recall, Samsung had the problem of figuring out with what to do with all those Note 7s and its components, which they’ve now solved by remaking them and reselling them as the FE.

“The Galaxy Note FE is Samsung’s direct response to the company’s commitment to responsibly dispose the Galaxy Note7 devices,” said Samsung in a press release.

The Note FE retains most of the specs of the original Note 7, save for the battery, which has been reduced from 3,500 mAh to 3,200 mAh.

Of course, the big question in everyone’s mind is still this: will it explode? Since the phone’s relaunch in South Korea in July 2017, there haven’t been incidents relating to its past problems, luckily. So if the past 3 months have been any indication, the reduced battery size and Samsung’s new quality assurance methods (they call it the “8-Point Battery Safety Check”), may have worked.

The price has also seen a reduction from the original Note 7’s launch price of P39,990 to P32,990. For a 2016 flagship with a flawed history, a more dramatic price reduction might have made it worthy of a recommendation.

In South Korea, where the FE was originally launched, CNN reported that the FE’s price saw a reduction of around 30% from the original Note 7. In its Philippine incarnation, that reduction is only about 17.5%.

The Note 7, minus the explosions, was a good device after all. However, since its introduction, a lot of great flagships with better specs and newer designs have arrived, with prices that are not very far from the FE’s.

The Galaxy Note FE will be offered in blue coral and black onyx, available at Samsung Experience Stores. – Rappler.com