Feb 20, 2018 11:42 AM PHT
Kyle Chua
Facebook Twitter Copy URL
Copied
If the image is representative of the final device, the ZenFone 5 becomes one of the first high-profile brands to incorporate the iPhone X notch – a feature that Android itself is looking to copy 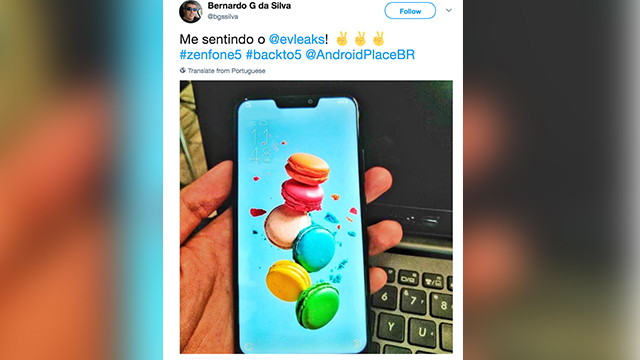 MANILA, Philippines – It appears like those eagerly awaiting the next flagship from ASUS do not have to wait very long to catch their first glimpse.

A leaked image, reported by Techradar and SlashLeaks, have popped up on Twitter showing off its new look that seem to imitate the iPhone X’s design. As with a lot of smartphones being unveiled this year, the new Asus ZenFone 5 is sporting a near bezel-less 18:9 display with an iPhone X notch that looks to be housing the earpiece, some sensors, and the front-facing camera.

A leaked spec sheet for a device code named “ASUS Z01RD,” speculated to be the ZenFone 5 popped up in the website of AnTuTu, a provider of benchmarking tools, a few days ago.

The alleged spec sheet of the ZenFone 5 mirrors what many are expecting of the ASUS’ upcoming flagship: a Qualcomm Snapdragon 845 chipset, an Adreno 630 GPU, 6GB of RAM, and 32GB of onboard storage. It’s supposedly going to run on Android 8.0 and have 2246×1080 resolution.

The flagship Asus ZenFone 5 along with its budget and battery-heavy counterparts are expected to be officially revealed at the Mobile World Congress on February 26, 2018. – Rappler.com