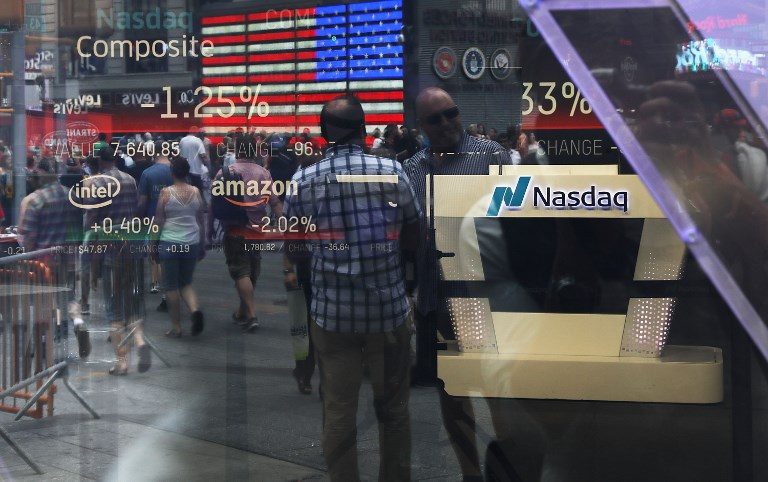 The tech-rich Nasdaq Composite Index in New York shed 1.4%, the third straight day it had lost at least 1%.

The Dow and S&P 500 also declined on Wall Street, along with leading equity bourses in Asia and Europe.

The losses came ahead of key central bank meetings later in the week in the United States, Japan and Britain and before a trove of major earnings and economic reports, including the July US jobs report.

US tech stocks have been in retreat ever since Facebook last week signaled slower growth as it spends more on data security in response to criticism over its privacy policies.

“We realize that these stocks are not going to justify their valuation, so there is a repricing of the Nasdaq to something more reasonable,” said Phil Davis of PSW Investments.

Analysts also fear the tech selloff could weaken the broader market given the size of the sector and its role as a catalyst for other sectors.

“Friday’s takedown of the information technology sector, and the lack of a spirited response to Amazon.com’s blowout earnings report, have also created a little hesitation within the trading/investing republic,” said analyst Patrick O’Hare at Briefing.com

“The question is, will there be a rotation within the stock market to other sectors or will a potential loss of leadership from the information technology sector trigger a corrective move driven by broad selling interest,” he added.

In the oil market, crude prices climbed, with US benchmark West Texas Intermediate rising above $70 a barrel amid worries that sanctions on Iran will pinch supply.

“US policymakers will likely play a more outsized role in guiding global oil prices than in recent memory,” said a note from Barclays. “We flag the possibility of significant upside price risks in Q4 and downside risk in subsequent quarters.”

Barclays warned that US President Donald Trump’s administration could take tough action and then be forced to retreat “because of the geopolitical fallout and oil price implications of the policy.”

Trump himself offered to meet with Iran’s leaders “any time” and without preconditions, one week after rhetorically sparring with the Middle Eastern nation on Twitter. – Rappler.com